During the late 1960’s the race to develop the worlds first automatic chronograph had two main contenders, the Zenith-Movado group and a joint effort from Breitling, Hamilton/Bren, Heuer/Leonidas and Dubois-Dpraz. Meanwhile Seiko had quietly been developing the calibre 6138 automatic twin register chrono which was planned to be the first to market and pip the Swiss to the post. Seiko quickly realised the technical challenges of the 6138 wouldn’t be overcome in time to release it as soon as they’d like, so they also developed the 6139 single register automatic chronograph alongside it which neatly side stepped the challenge of getting the hour register chronograph layer sandwiched between the motion work and the calendar components. Because of this decision, in February 1969 the first 6139’s were released to market which pipped Breitling groups calibre 11 official launch on March 3rd. The 6138 challenges were overcome and it was released the following year in 1970. The example featured here is a 6138-0011 more commonly know as the ‘UFO’ although it was originally advertised by Seiko as the ‘Yachtman’. This came in for a movement service and to correct a number of faults amongst which were a chronograph that wouldn’t run for more than 30 seconds and a minute register that reset everywhere but zero! It also came with a number of parts and a replacement case and crystal. 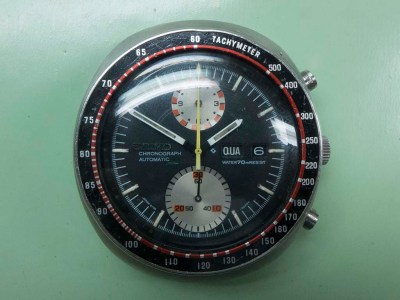 It didn’t look to bad from the outside, the lume was damaged on the indicies and the crystal a little worn but all in all not too bad. The caseback displays a production date of March 1972. 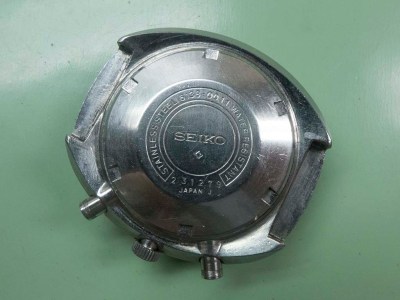 With the caseback removed the movement looked reasonably clean at first glance but I soon spotted a few issues with it. The case spring was a little corroded but at least it was present!

However the hairspring was either contaminated, magnetised or misshapen. I demagnetised the movement before stripping it which is a bit arse about face, it’s normally done before timing the watch.

I removed the autowind assembly before uncasing the movement and spotted another problem. The owner had complained of the hammer spring coming off the reset button, this was because whoever had this apart last time hadn’t reassembled it correctly and had the spring bent around one of the bridge pillars instead of the stud on top of the column wheel spring.

This also had the effect of the bridge not sitting flush so instead of wondering why that was, a longer screw was used on that particular pillar!

The movement was then dropped out. The owner wanted the damaged lume replacing, and the hands redone to match as they were a bit grubby. 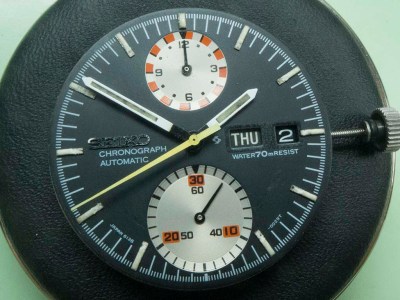 Because of this I removed all the lume from the batons before removing the dial. This way it doesn’t matter if any stray old lume gets where it shouldn’t as everything has to go through the cleaner anyway.

I also stripped the hands in readiness for later on.

The dial was removed and the calendar components looked to be OK. I love the sexy day ring, SEX is the Portuguese abbreviation for Friday! 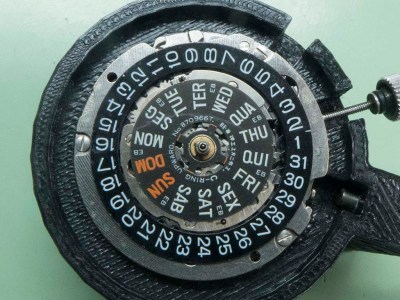 With the day date rings removed another problem is spotted, can any 6138 aficionados spot what’s amiss?

Yep, you got it, the hour wheel stop lever was on upside down and above the intermediate stop lever, it should actually be below it. This has damaged some of the fine teeth on the hour wheel so they will need dressing otherwise it will stop recording when it gets to that point.

The rest of this layer was uneventful, just the keyless work to remove now…. 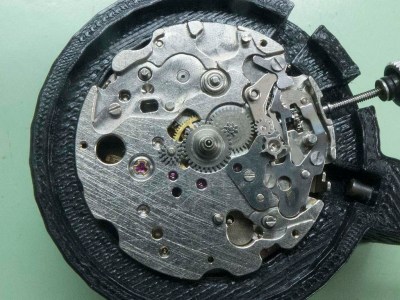 ….and that’s this side done.

After the balance was removed the chrono layer was stripped. You can see wear on the bridge where the rotor has been touching due to a worn bearing. The owner provided me with a rotor bridge with a good bearing in to replace the shot one.

The hairspring wasn’t contaminated or magnetised, it had been damaged at some point, you can see where the coils are touching around the periphery, it certainly wouldn’t keep good time like this! 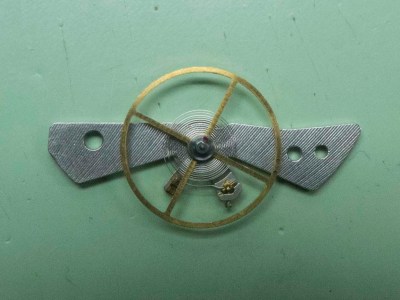 With the time it takes to correct a gradual curve it’s actually more cost effective to just replace the balance. As strange as it sounds, sharp kinks or bends in hairsprings are a lot quicker and easier to correct!

With the chronograph bridge removed you can see where the hammer spring had been bent around the wrong pillar, no wonder it kept popping off the pusher! Another issue was the lack of a stop screw for the first and second coupling levers, you can see the hole where it should be above the minute recording wheel.

The reset spring wasn’t the only one out of shape, the start/stop pusher spring was also damaged. Again if you have a spare set it’s quicker and cheaper to just replace these. 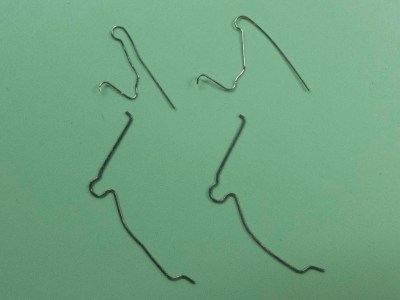 The rest of the stripdown went smoothly and for some reason I forgot to take the usual component pictures! The parts went through the cleaner and reassembly commenced starting with the mainspring.

The wheel train back in position.

The chrono layer coming together.

This is what the first and second coupling lever stop screw looks like, it has a shoulder on it to allow the levers to operate freely. 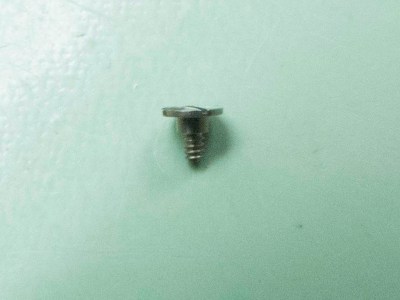 It’s ready for the chrono bridge in this shot.

The bridge was fitted which threw up another problem, the minute recording wheel was quite stiff and it was hit and miss whether it advanced every minute or stopped the watch from running. When I removed the bridge you can see it took the wheel with it. 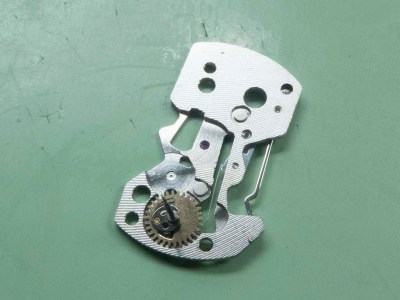 At some point the bridge had been tightened down on the pinion which had spread the bush wall slightly.

The answer is to use a jeweling tool to ream out the damaged section of the hole. The bridge is placed on a suitable anvil and the smallest reamer was used to ease the hole.

The bridge was refitted and the wheel operated correctly now but the reset was all over the place! This was due to a very badly adjusted hammer cam which wasn’t allowing the hammer to fully act on the wheels heart. This left a slight gap which caused the random reset position.

On the other side the keyless work was lubricated and refitted. 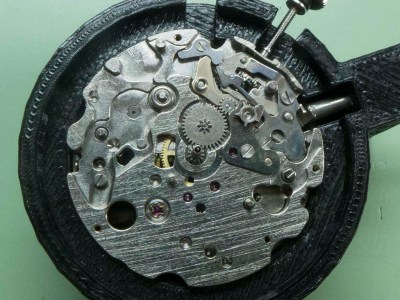 In this shot you can see the correct position of the hour recording wheels stop lever. The damage on the wheels teeth has also been dressed. 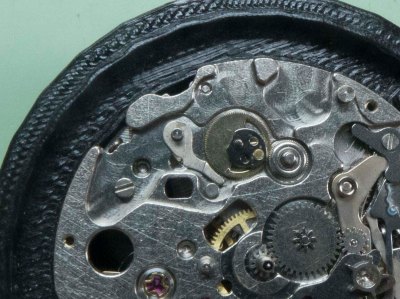 The intermediate stop lever goes over the top of the stop lever now, as it should. It’s ready for the calendar plate to be fitted now.

The calendar rings were fitted….

…ready for the dial. Once this was back on I mixed up some lume compound and relumed the batons. 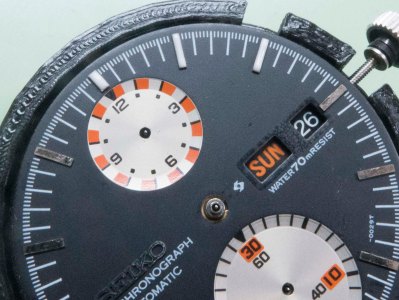 ….then just the hands to do. 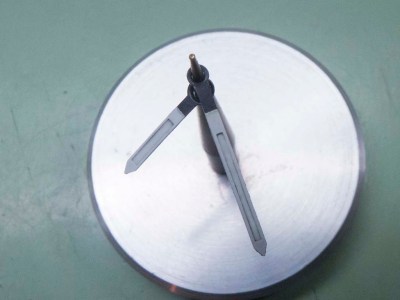 The lume work was left to cure overnight and the case was addressed next. The existing case had a whacking great ding in it so the owner sent a replacement along with a NOS crystal and gasket.

The pushers and crown’s seals look at first glance to be fine but with watches of this age they rarely are. These had become so brittle they had to be broken off.

The pushers, springs and crown were cleaned up and new seals fitted.

The case work was now complete. 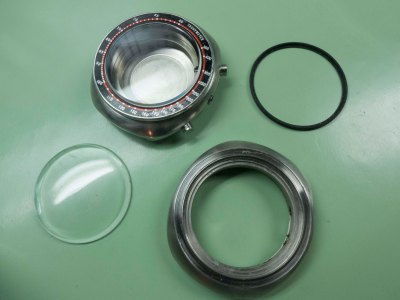 The next day the lume had cured enough to allow the hands to be fitted. 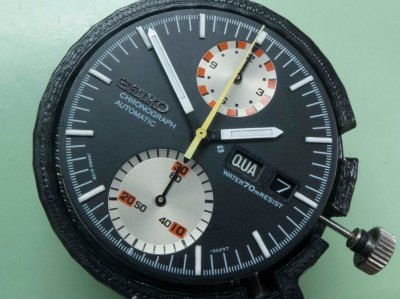 The movement was recased and the last issue to deal with was to replace the autowind bridge and bearing.

The rotor was refitted and now swings freely without touching anywhere.

The case was closed up and that’s that, all done! I know people have to learn how to service these but there are tech guides available online, there’s no excuse for the kind of ham fistedness seen in this example when it arrived! 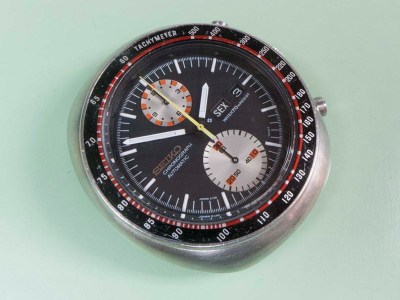