The other 6105-8110 I wanted to post about is this example. It’s not intrinsically any different to most of these asymmetric divers, but it did need a humungous amount of dial work which is the reason it’s featured here.

In contrast to the last 6105 featured this one must have spent a lot of it’s life in a humid climate and as the seals slowly failed moisture got in it made mincemeat of the lume. As can be seen the hands must have been so far gone they’ve been substituted with an incorrect set, these look like they’ve come from a Seiko Sports 5126-8100. You can see from this shot the damage moisture can do to lume and the surrounding frames.

I started with the removal of the old lume whilst the dial is still attached to the movement. Doing it like this gives me a good grip of the assembly and it doesn’t matter where the old powder goes as everything in the movement will be cleaned as part of its service. The lume had the consistency of concrete and it was a devil of a job to dig out!

With the old lume gone you can see how the frames have been attacked by the damp. These should be printed bright silver but there was little left now.

To re-silver the frames I experimented with different types of modellers sliver and aluminium paint. I eventually settled on this one which had the finest granularity of silver flake, these three frames had two coats applied at this point so the owner could see what it looked like and decide whether to carry on and do the rest. It’s very painstaking work that is applied with a fine oiling pike and has to be left 24 hours between coats! 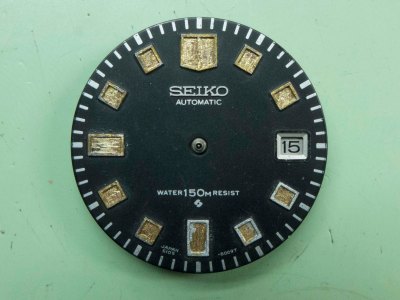 We decided on three coats in the end and this is the dial after the frames had received their final coat of silver. 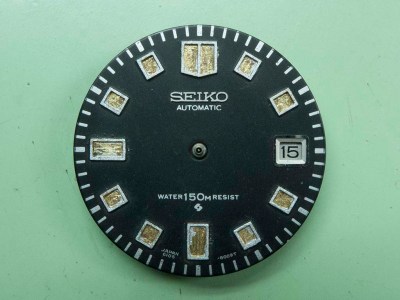 A suitable handset had been shipped with the watch so these were cleaned and polished as best I could. I mixed up some lume and coated the hands first, not forgetting the pale red tint on the stoplight seconds hand.

The dial was next, this is during the first coat of lume.

This was after the second coat….

….and this was 8 hours later after the solvent had evaporated. It certainly looks a lot better now than it did! 🙂

Again I won’t bore you with the strip down, save to say the movement wasn’t in too bad a shape considering the obvious moisture content of the case. 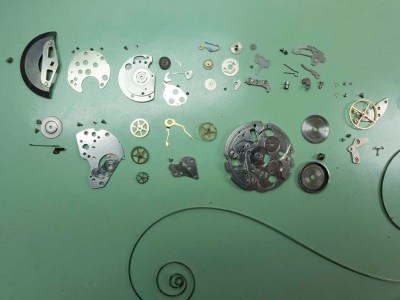 The case was stripped, ultrasonically cleaned and rebuilt with a new crystal.

The crown also received a new seal, these are fiddly little buggers to strip without damage but this is what the inside of a 6105-8110 crown looks like, the old o-ring is the one at the bottom of the picture 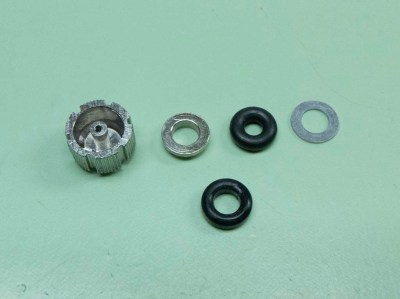 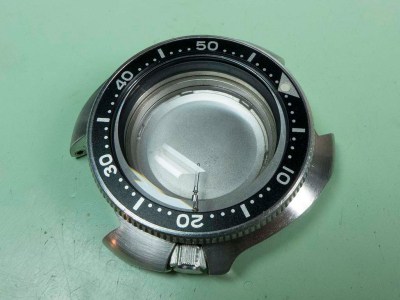 Here’s a few pictures of the rebuild, no captions necessary! 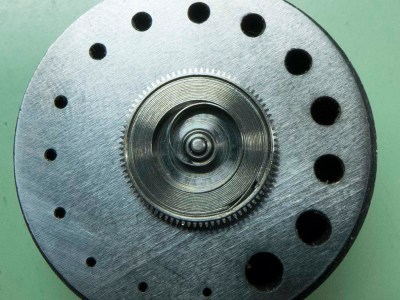 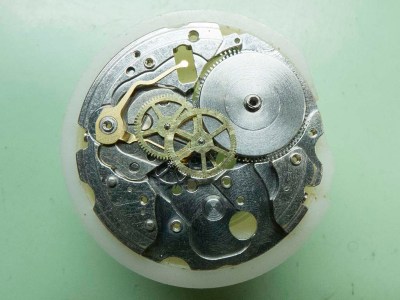 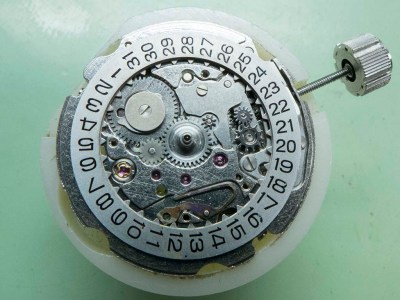 And soon enough it was all back together. It’s undergone quite a transformation this one and is unrecognisable as the dial that arrived. It just goes to show never write off a dial if the print is still good. 🙂