Although I’m still very busy right now I couldn’t let this one pass without featuring it, it’s a beautiful Sinn/Bell & Ross Bundeswehr type chronograph powered by a Lemania calibre 5100 movement. This movement was released in 1978, although Omega produced Lemania 5100 based Speedmasters from 1974 so the movement itself was around before Lemania made it available to everyone. Sinn, Fortis and Tutima were Lemanias biggest customers and they supplied the military with various chronographs based on the 5100. The reason the military liked the 5100 was due to it being a simply constructed but rugged movement, there were no fragile chronograph coupling wheels in this calibre, the chronograph is directly driven via a vertical clutch. This along with the nylon movement spacer blocks give it excellent shock protection, however despite its rugged construction from a watchmakers point of view it uses quite an antiquated type of pillar construction.

With the movement turned over you can see the case utilises a type of compressor arrangement where the case and crystal form a module that is dropped into a framework that supports the bezel and lugs. 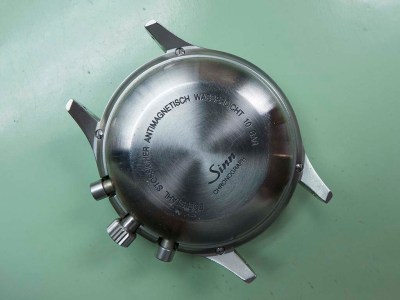 You can see the construction a bit more clearly here, undoing the four case screws allows the movement ‘cassette’ to be removed. 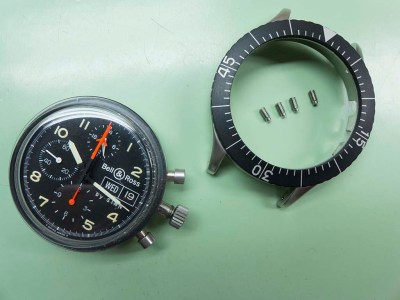 A closer look at the ‘cassette’. 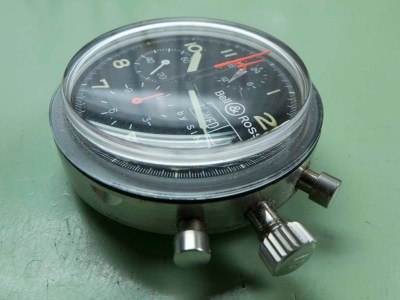 To remove the movement the crystal can be lifted off its seal and the split crown pulled out.

How the bowl type case looks with the movement extracted.

I removed the hands and dial then turned the movement over to allow me to take the oscillating weight off. 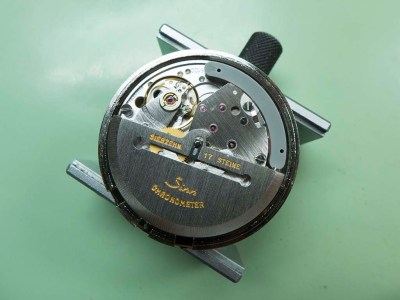 With the weight off I turned it over again to start stripping the calendar components, in this shot you can see the offset day disc. 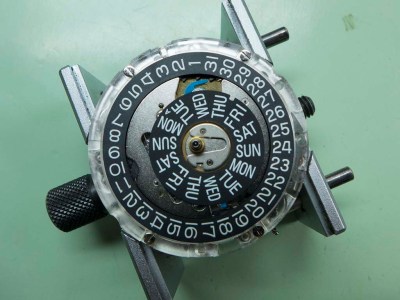 With the calendar parts stripped I was then down to the chronograph lever level. There’s a lot of plastic and nylon used in one of these, which contrary to what you’d think actually adds to the movements ability to absorb shocks. 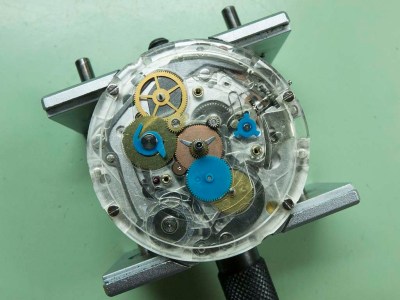 Once I’d removed the plastic plate the lever work was fully exposed.

With the lever work removed there’s just the keyless work and a couple of wheels to remove now. 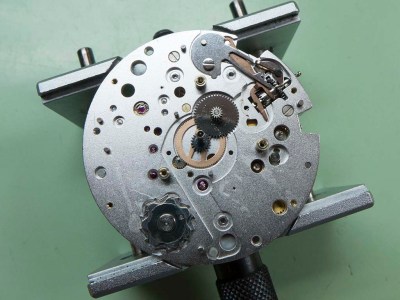 This side was soon fully stripped.

I turned the movement over to start stripping the motion work.

Another nice feature of the 5100 is the ability to be able to remove the complete barrel just by removing it’s axle, very neat. 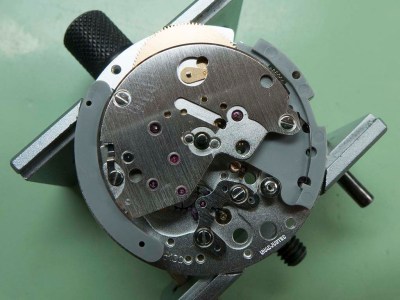 With the train bridge removed you can see the wheel train beneath. The contraption next to the escape wheel is the vertical clutch and operating lever.

Just the nylon spacer to remove……

….and the movement was ready for cleaning and inspection. 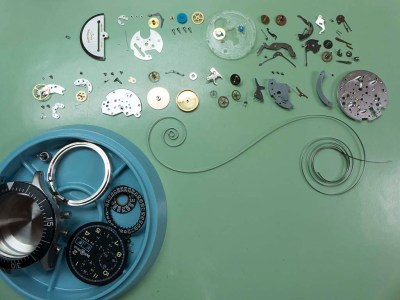 After inspection the rebuild started with the mainspring. I was unsure as to whether it would retain enough power to produce the required amount of amplitude, ordinarily if I have any doubts I’d replace it as a matter of course. However due to the simple method of barrel removal coupled with the higher than normal cost of a replacement allowed me to try it first and see. Another novel feature is the fact the arbor is actually part of the lid meaning the barrel is a three piece affair instead of the four piece you’d typically find. 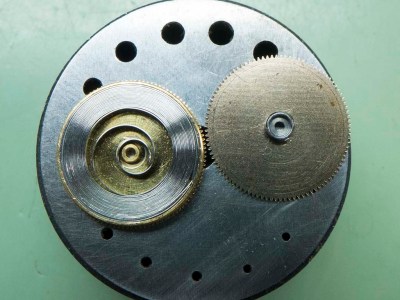 The rebuild continued, I’ll let the pictures do the talking here 🙂 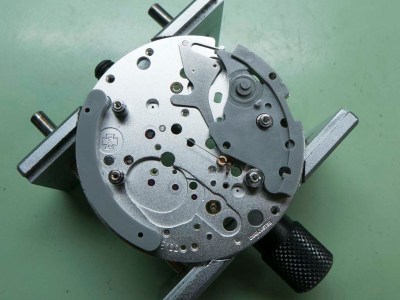 With the motion work done I turned it over to start on the lever, keyless and calendar work.

The movement was now able to be put on the timing machine for its rough adjustments but as suspected the mainspring wasn’t delivering enough oomph for a freshly serviced movement so I ordered a new one and replaced it. 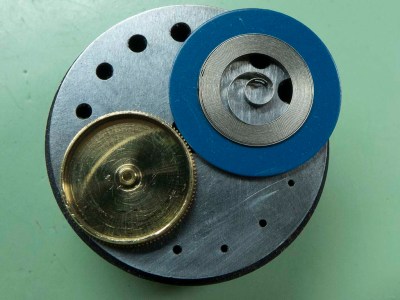 The casing ring and rotor were then added which allowed me to recase the movement.

The dial was then fitted…. 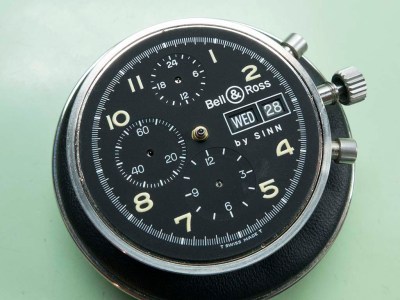 ….along with the handset. Because of the centre mounted minute counter the 5100 has quite a tall hand stack, including the 24 hour register there are 5 hands that have to clear each other, the dial and the crystal!

The handset was finished off….

….the crystal and seal replaced…. 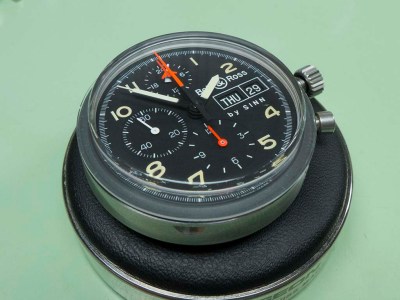 ….and the cassette was refitted into the bezel/lug framework and the four screws were tightened. 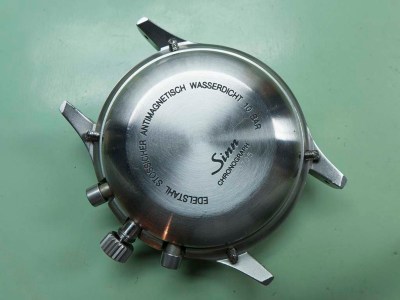 What a stunning chronograph, as I mentioned at the start of this post I love these Bundeswehr type chronographs and this Sinn/B&R combination is a beauty. 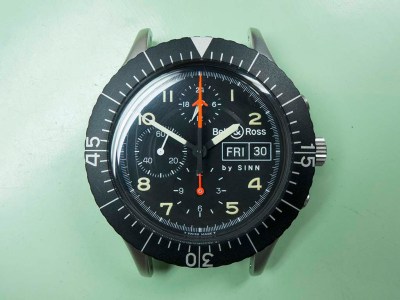 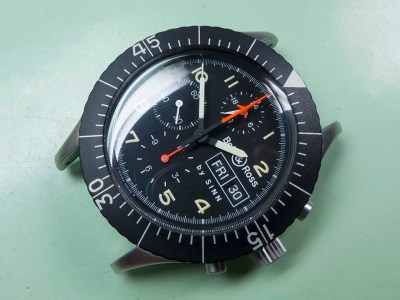