It’s been bonanza time for vintage Grand Seikos here at watchbloke towers. This second generation GS calibre 430 had a problem with the hands only being able to be adjusted by rotating the crown clockwise, when turned anticlockwise it felt notchy and the hands didn’t move. The second generation GS’s such as the one featured had a more chunkier case than its predecessor, utilising sharp edges, mirror finishes, flat surfaces and contrasting brushed finishes that created a distinctive appearance. Seikos first designer Taro Tanaka developed this type of design to the classic style that Seiko used on its high end watch which became known as the “Grammar of Design”. This started with the next iteration of Grand Seikos, the 44GS of 1967 but it’s clear the DNA came from the 43999. The calibre 430 movement that powers the watch is a manual wind, 35 jewel, 18,000bph self certified chronometer grade movement featuring a date complication. This calibre was only used in the GS from 1963 to 1964 and was replaced by the calibre 5722 which had a higher beat rate of 19,800. The 430 heralded the last use of a low beat movement in a Grand Seiko. 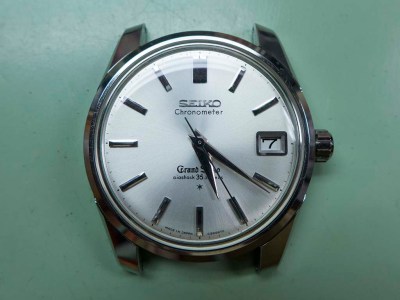 The caseback features the “lion rampant” stamped on a gold medallion mounted in the centre and the serial shows the watch was produced in November 1964. The lion rampant signified Seikos chronometer grade movements.

With the back removed you can see the calibre 430 movement with its movement serial number and Chronometer proudly engraved on the train bridge. Also of note is the tadpole fine regulator adjuster.

Again I decide to remove the balance before removing the movement to reduce the possibility of any damage.

With the movement removed from the case the beautiful starbust finish dial can be seen. 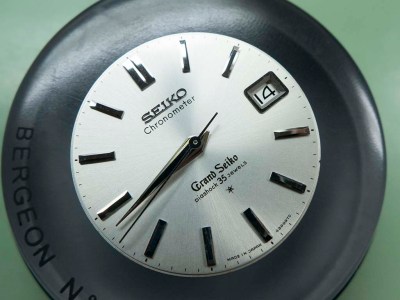 Underneath that dial the calendar components can be seen.

The dial side was soon stripped.

The going train didn’t take too long to strip. Note the plethora of diafix jewels again!

Soon the watch was in its component parts ready for cleaning and inspection.

Whilst these parts were whizzing through the cleaner I stripped the case ready to ultrasonically clean it and fit a new crystal.

The movement reassembly started (as always) with the mainspring. 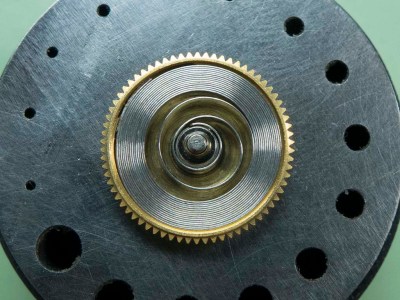 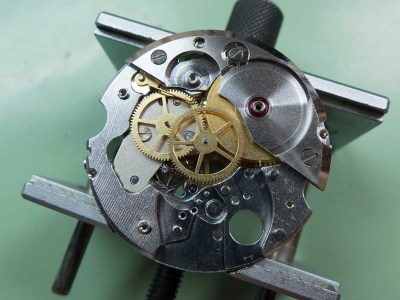 Once the balance was refitted I put it on the timing machine for the rough adjustments. I don’t normally post timing pictures on these articles because they’re pretty meaningless, with a properly serviced watch they’ll always look good immediately after a full wind in the dial down postion, what really counts is the delta figure which is calculated by dividing the results the watch gives in the various positions. However this movement is in such good order with so little wear that its amplitude is above 290 degrees, with a vintage Seiko you’ll not see this very often so I’ve relented and posted one 🙂

Once the beat error and rate were dialled in the reassembly of the dial side components could be started. 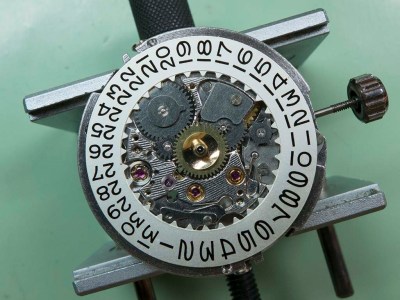 With the donor clutch and intermediate gear the time setting was restored to full health.

The hands were given a light polish on a buffing stick and the dial and handset were replaced.

….and the caseback replaced. This particular watch has been on my final test machine for the last 13 days now (the owner of this piece also owns the GS3180 and Queen Seiko – have I mentioned I’m not envious at all!) and in that time it’s gained 3 seconds. Not bad for a 51 year old 🙂