This Electronic Seiko from October 1969 came in for some tender loving care recently. Electronic watches had been around for quite a while by the time Seiko released their first Electronic watch, Hamilton, LIP and Bulova were a few of the other major manufacturers from that period. However, Citizen’s X-8 Cosmotron of 1966 is generally accepted as the first commercially successful electronic movement that was regulated by a balance wheel. Seiko responded with the calibre 31xx in 1967 followed by the calibre 37xx in 1969, the 32xx and 33xx in 1972, and the calibre 07 Elnix series in 1973/4. Japanese electronic watch production was short lived due to the rapid development and falling costs of quartz production of which Seiko was first to market with in 1969 with the calibre 35 Astron. The 3102-7000 “Electronic” featured here came in with problems to the running and quick setting of the movement, you can see in the opening photograph the minute and hour hand are out of sync. 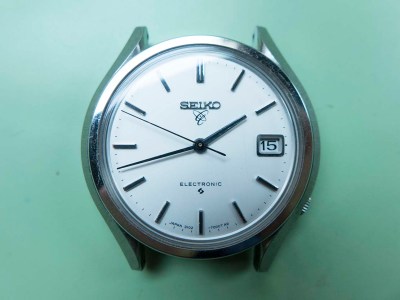