Bremont is a British company that makes excellent watches with some great designs but I’ve always had them down as a bit, I don’t know, gimmicky? By this I’m referring to their limited editions, some with bits of old aeroplanes and ships used in their construction and of course the seemingly limitless special projects for the armed forces. I have nothing against that per se but I didn’t really get it. What I do get is the fact that they are bringing mass production and in house manufacturing of wristwatches back to the UK and that has to be applauded. Whilst not yet at the point where they produce their own movement they do a fantastic amount of their own manufacturing in the UK and an in house movement is well along the development path.

When an opportunity to have a tour around Bremonts head office and assembly/service facility along with their manufacturing facility presented itself even though I didn’t “get it” I jumped at the chance!

Bremont are situated a few miles from where I live and over the past few years I’ve watched them construct their purpose built head office, which they’ve now outgrown. They’ve now commissioned a state of the art production facility in the village where I grew up, this will bring all their production and assembly/servicing under one roof instead of being split across multiple sites as it is at present, and it’s due for completion in 2020 I believe.

After seeing first hand Bremonts facilities and spending a few hours in the company of Nick at their head office and Giles at their case manufacturing facility I must say my perception of the Brand has changed. To see the passion the brothers have for doing what they do and the sheer attention to detail that is shown by all the members of staff I met was an eye opener. I now understand why they create all their special projects and why they are such a core part of their business, as I said previously I thought it was a bit gimmicky but it really fills a niche in the market that no other manufacturer has properly tapped into and I believe the brothers are doing this for the right reasons. Being shown around the assembly and service areas I had a big case of workshop envy, their workshop equipment is currently being completely upgraded and the investment must be massive. Seeing their case making and development facility first hand really blew me away! The accuracy of the machines that are used to produce and finish the cases is jaw dropping and I think Bremont are the only watchmaking company outside of Switzerland to have these German/Japanese machines.

What I also found incredible is the traceability they’re striving for, when all their new systems are up and running, in addition to the usual manufacturing “build sheet” which is basically knowing which tech assembled or serviced your watch and on what date, they will also be able to immediately ascertain from the live online database which machine and at what time the various components were made, the complete records of all the timing tests it had undergone in the factory, the pressure test results, even down to having a log of how tight the various individual movement screws were torqued down to. Jaw dropping stuff. END_OF_DOCUMENT_TOKEN_TO_BE_REPLACED

I’ve serviced a few calibre 12 Heuers but have never posted about one yet (although I have posted about a Thermidor which used a calibre 12 Kelek movement), so when this one came in I made a mental note to do so.

END_OF_DOCUMENT_TOKEN_TO_BE_REPLACED

I completed this unusual job (all will be revealed later) over a year ago and have been meaning to post about it ever since, stumbling across the photographs on my hard drive the other day means I’ve now finally got it done! The watch, a Panerai PAM90 was bought for the owner by his wife as a wedding present 11 years ago. It came brand new from a dealer and as such was box fresh! After the intervening years he found he wasn’t wearing the watch as much as he’d like to, so as it was a watch that would never be sold he set about giving it a little makeover. The watch arrived here for me to strip the case and return it to the owner then service the movement. Meanwhile the owner was planning something special with the case! 🙂

END_OF_DOCUMENT_TOKEN_TO_BE_REPLACED

This Electronic Seiko from October 1969 came in for some tender loving care recently. Electronic watches had been around for quite a while by the time Seiko released their first Electronic watch, Hamilton, LIP and Bulova were a few of the other major manufacturers from that period. However, Citizen’s X-8 Cosmotron of 1966 is generally accepted as the first commercially successful electronic movement that was regulated by a balance wheel. Seiko responded with the calibre 31xx in 1967 followed by the calibre 37xx in 1969, the 32xx and 33xx in 1972, and the calibre 07 Elnix series in 1973/4. Japanese electronic watch production was short lived due to the rapid development and falling costs of quartz production of which Seiko was first to market with in 1969 with the calibre 35 Astron. The 3102-7000 “Electronic” featured here came in with problems to the running and quick setting of the movement, you can see in the opening photograph the minute and hour hand are out of sync.

END_OF_DOCUMENT_TOKEN_TO_BE_REPLACED

This post is just a short update to a watch that was on the bench earlier this year, namely an Astron 35-9000 date.

END_OF_DOCUMENT_TOKEN_TO_BE_REPLACED

Apologies for the lack of updates (I seem to be saying this everytime I post something!), this is solely due to the volume of work that keeps coming in. I have a huge backlog of work that I think you’d find interesting so I’m making a concerted effort to pull my finger out and get posting again starting with this gorgeous Laurel from (we think) 1915. I say we think because I’m assuming Seikosha was using the same dating system back then as they do today which would mean this was produced in August 1915. This may not be correct but it would fit with what we know about the history of the model, the Laurel was the first wristwatch Seikosha ever produced and production began in 1913 pretty much straight after they had started producing enamel dials in house. The first Seikosha wristwatch with Seiko branding on the dial came in 1924 and was smaller in diameter at 24.5mm. The Laurel is 29.5mm in diameter with a 12 ligne movement which is small by today’s standards but back in those days it was a generous size for a gents watch.

END_OF_DOCUMENT_TOKEN_TO_BE_REPLACED

I’m very happy to have had my blog awarded number 8 in the top 15 watch blogs from feedspot! All the more remarkable when I’ve hardly had the time to post any updates this year. Hopefully this will change as soon as possible as I have shedloads of interesting jobs to blog about, watch this space 🙂 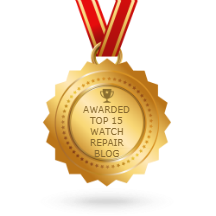 I know updates have taken a back seat this year solely due to the volume of work that keeps coming in but I couldn’t let this pair pass by without a post about them. As most people with an interest in horological history will know, the world’s first quartz wristwatch was introduced on Dec 25th 1969 by Seiko. Called the “Astron” it was powered by Seiko’s 35a quartz movement which had been 10 years in development and was truly a revolution in wristwatch manufacture, in fact the quartz movement changed the face of wristwatch production forever and caused years of change and lets face it some very hard times for watch manufacturers around the rest of the world. The 35a movement’s frequency was 8192 Hz, a quarter of the frequency of quartz oscillators today although the accuracy was still an impressive ±0.2 seconds per day or ±5 seconds per month. One of the major features was its hybrid integrated circuit innovation which consumed far less power than transistors of the time. Another breakthrough was the step motion seconds hand made possible by developing a miniature open step motor, this innovation was adopted by other manufactures of quartz watches later on. This was only possible because Seiko did not pursue monopolization on patent rights of those unique technologies and opened them up to all the world. At the time of release the Astron cost 450,000 yen ($1,250) which at the time was equivalent to the price of a medium-sized car. Even at this high price after the first week Seiko had sold 100 units. The case was made from 18k gold and had a distinctive textured finish, the dial also had a textured finish and the hands were of the simple baton/stick type.

To get to work one one of these historical pieces is a joy but to get two in at the same time, one date and the other non date, really was an honour. The owner is a huge Seiko collector with one of the most comprehensive collections of vintage Seikos on the planet. The watches came in with the non date version in a non running state and the date version running. Both required servicing because there was no baseline established as the history of both pieces was unknown. Obviously we were hoping the non running examples problems were caused by either something mechanical or a dirty connection. Below is the quintessential no date Astron.

END_OF_DOCUMENT_TOKEN_TO_BE_REPLACED

This lovely Lemania HS9 came in as a non runner recently for a spot of fettling and a service. These models are known as the HS9 after the engraving on the caseback. HS stands for Hydrographic Supplies (or Services), a government organisation tasked with the procurement of timepieces (and other devices) for the Navy. The 9 is the number of the specification that this watch was made to meet which was a wrist chronograph. Specifications 1 to 8 included normal wristwatches, deck chronometers, pocket watches and so forth. So this model is made for the UK government for issue to the Royal Navy Fleet Air Arm. This one is a silver dialled example but they did come issued with a white dial (with no luminous compound) for use on nuclear submarines and black dialed ones were issued to the RAF. These Lemania models were supplied to many armed forces the world over and are one of the nicest issued military watches in my opinion. It’s powered by the beautiful manual wind, 18,000bpm Lemania 15CHT movement. The dial has everything going for it, it’s Lemania signed with the company logo above, below that is the T – circle logo indicating the luminous compound is tritium based (rather than earlier radium), it has the broad arrow above the 6 denoting it was government property and it doesn’t have the long dash of luminous compound at the six o’clock marker which is sometimes seen. The crown isn’t the original but the style does suit the watch so it’s not too big a deal.

END_OF_DOCUMENT_TOKEN_TO_BE_REPLACED

This Panerai Luminor Submersible ref PAM 243 came in recently for a service and I thought it would make a good subject to post about simply due to the fact that it uses the calibre OP III movement which is based on the venerable Valjoux 7750 chronograph.

END_OF_DOCUMENT_TOKEN_TO_BE_REPLACED

The Watch Bloke
Blog at WordPress.com.