The 300m 6159-7001 (and 7000) diver is Seikos first proper attempt at a “professional” dive watch. When I say the first there was of course the 300m 6215-7001 which was released a year earlier in 1967, and the 150m 6217-8001 released in 1965, but according to the Seiko parts catalogue of the time these two models are listed as a divers watches and the 6159-7001 is listed as a professional divers watch – so who am I to argue with Seiko? Of course another clue is the fact the 6159 has”Professional” printed on the dial and the 6215 doesn’t! The 6215 and 6159 cases are very similar, both are monocoque and both share the same dimensions but the 6215 has a larger diameter crystal and slightly different bezel. It’s inside where the biggest changes are, instead of the 6215’s 35 jewel 19,800bph movement it has the beautiful 6159a movement, the 25 jewel, 36,000bph masterpiece that allows the seconds hand to almost glide around the dial. The case style and distinctive lines continue to this day in Seiko’s SBDX001 more commonly known as the MM300.

The example featured arrived looking rather sorry for itself.

The lume compound on the hands and dial was starting to rot and was just beginning to affect the gilt of the hands and indicies frames. The bezel had a very poor insert and had a tremendous ding in it at the 8 minute mark, also the movement was in need of a service. The first job was to remove the bezel and strip the case. 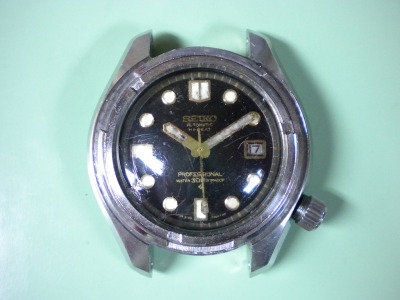 This being a monocoque case means the movement has to be removed through the front so the crystal locking ring has to be undone and a host of gaskets and nylon o-rings are removed to allow the stem button to be reached. 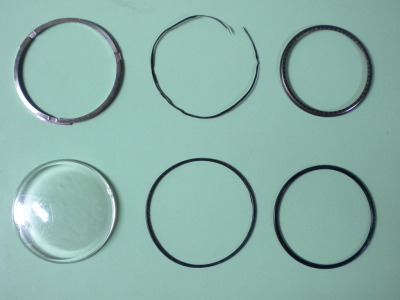 Once the button is depressed and the stem removed the movement can be taken out.

The movement looks to be in reasonable shape with little corrosion evident so a service should sort out any problems.

The dial and hands are in need of a sympathetic relume.

The movement was stripped ready for a trip through the cleaning machine and subsequent inspection.

At the time of refurbishing the watch we couldn’t source a genuine crystal so a bit of detective work was in order. The original crystal has the part number 325W14GN and we know this crystal can be used in the 7549-7010 tuna who’s part number is 325W16GA00. As these were also unavailable it turns out they were superseded by the crystal with a part number of 325W26HB0A so one of these was ordered and it fitted a treat. Common problems with substituting crystals on dive watches is that the inside curvature can be different which means the hands could foul the crystal, also the profile can be different, this time allowing the bezel to foul so it can be a bit of an expensive gamble if it does go wrong. 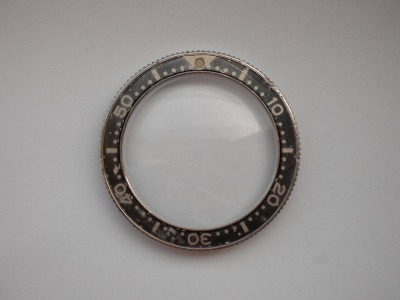 Another issue with these 6159 calbres is the barrel and mainspring can’t be opened, the barrel is flanged over the lid which prevents opening. The barrel is actually printed with “do not open” to warn you not to try! I have heard unsubstantiated rumours of the barrels being opened for cleaning but when it’s not your own watch the risk of something going wrong is too great, these parts have been unobtainable for years! I do have my own 6159-7001, and when I get around to servicing it I’m going to see if it is feasible to get it open without any damage.

The parts were loaded into the baskets and sent for a spin in the cleaning machine. 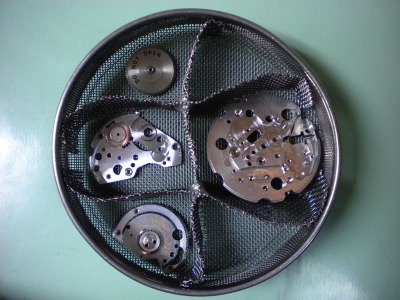 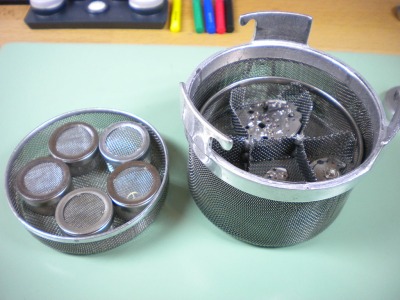 Once cleaned the parts were brought together for reassembly and the hands and dial were sent off to a specialist for a relume.

The motion work going back together. 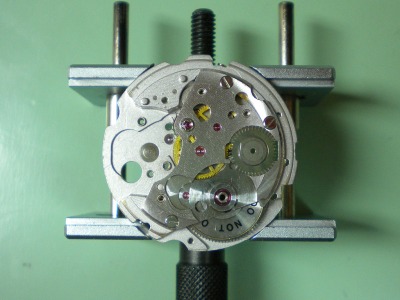 With the autowind bridge and balance refitted ticking away nicely. These 6159a’s differ in a few subtle respects from the 6159b which was fitted to the 6159-7010 tuna.

As you can see in this comparison picture, the rotor is held by a single screw on the b and the curb pins on the regulator are adjustable.

Whilst the work was progressing with the movement I had an enormous stroke of luck regarding the bezel, I managed to source one that was in much better condition than the original.

The bezel retaining spring on the original was a “c” type, once these get worn they don’t hold the bezel on very well and this watch was no exception. I much prefer the 8 sided spring of the earlier 6217 divers, they hold the bezel in place much more firmly. As an 8 sided one was never made for this model I fabricated one from some stainless steel wire. 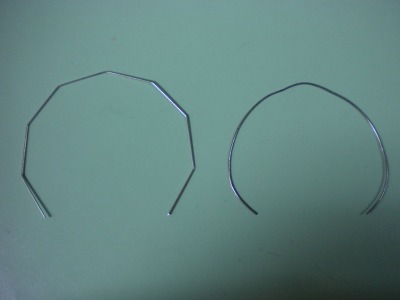 Meanwhile the hands and dial had returned from the relumers so they were fitted.

The owner wanted this fully water resistant to the original specifications, as new seals had been fitted the first stage is a 6bar leak test which it passed successfully.

This allows it to go into the hydrostatic tester to be tested to its rated depth. 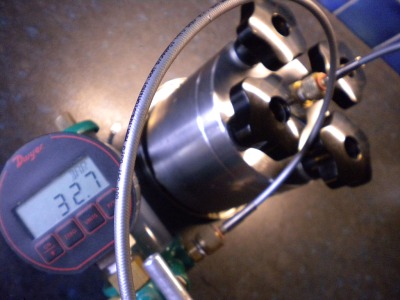 A drop in pressure is the indication all is not well, but even if everything is fine once the watch is out of the tester it’s warmed through on the warming plate then a cold droplet of water is placed on the crystal. If it fogs up below the droplet there has been moisture ingress.

Finally finished with all of it’s replaced parts. 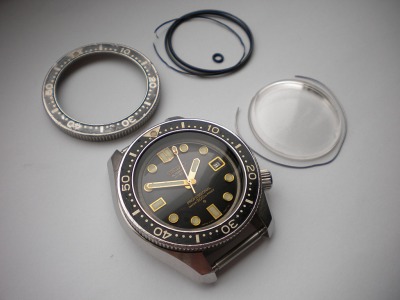 It’s a beautiful high beat classic dive watch that’s now been brought fully back to health, these watches are one of my favourite Seikos of all time. 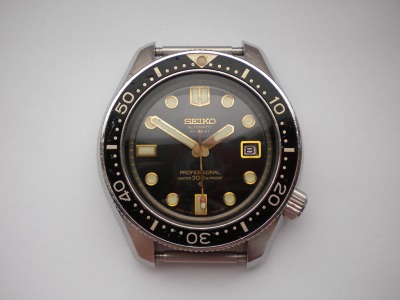 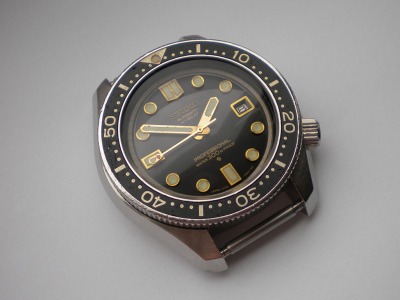 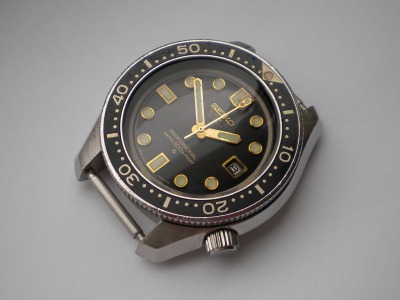