The Scubapro 450 is based on Seikos 6306-7001 model, and were produced in the late 1970’s as part of a marketing contract in conjunction with the Scuba-pro dive equipment company. The model it’s based on is a Japanese domestic market watch produced alongside the very similar 6309-7040. The difference between the calibre 6306 and 6309 is the 6306 has a kanji day wheel, has four extra jewels, it has a hacking mechanism and has different machining around the crown making the opening slightly larger. The difference between the Scubapro 450 and a stock 6306 is just the printing on the dial. The most obvious difference is the “Scubapro 450” script situated above the “Water 150 Resist” on the dial, but a harder to see change is the dial code went from 700L T to 700J T. It’s generally accepted that the Scubapro versions were produced between 1978 and 1979 but to muddy the waters examples have surfaced with caseback dates of 1976, 77, and 83. Were these actually produced in those years or have the casebacks been changed? The 1983 example is doubly strange because that one post dates 6306’s end of production date of 1981! As ever with vintage Seiko nothing is clear cut – part of the appeal maybe?  The example featured below is in outstanding condition and belongs to a very knowledgeable UK collector. It came in for a full movement service so I seized the chance to document it! 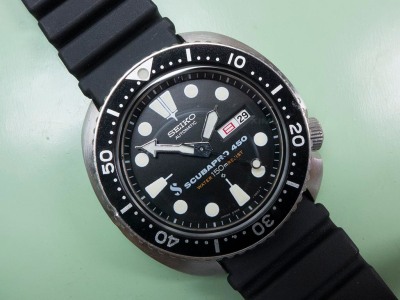 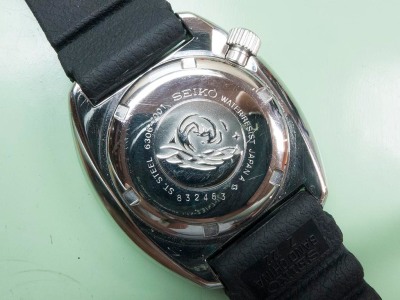 Undo the back and a beautifully clean movement is exposed. 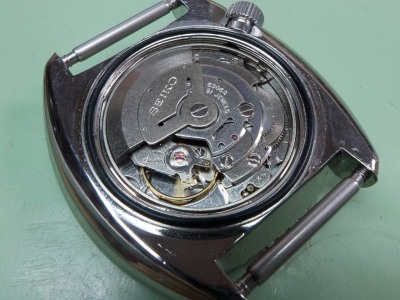 Drop the movement out and the pristine dial and handset can be seen. Genuine Scubapro dials have that very slight pale blue cast to the additional printing, something the fakes haven’t been able to reproduce to date. Note the deep bevel around the date window, indicative of Suwa produced dials pre 1981, after this date the bevel became less pronounced.

With the dial, handset and day wheel removed the calendar side is looking super clean. 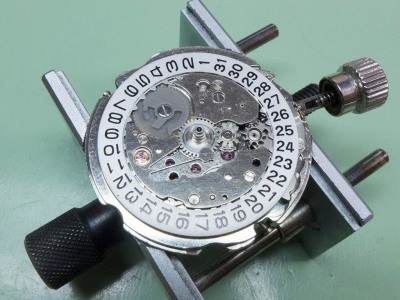 The stripdown continues, it’s actually a pleasure working on such an unabused example!

With the keyless work removed you can see the first glimpse of one of the differences between this and a 6309 movement, namely the end of the hacking lever peeping out. 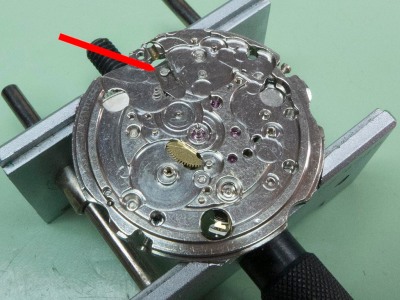 With the movement turned over everything is looking in excellent shape.

And with the autowind mechanism removed you can see the other difference between a 6306 and a 6309, namely the diafix anti shock protection on the escape and 3rd wheel pivots. These add 4 jewels to the 17 count of the 6309, in the picture the springs and caps have already been removed. 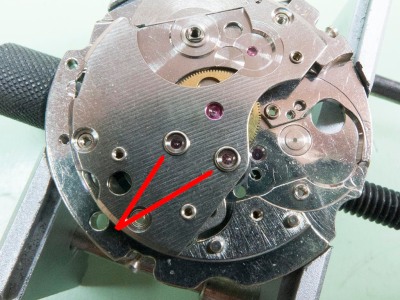 The train bridge has been removed in this picture, note the hacking lever situated to the left of the movement. 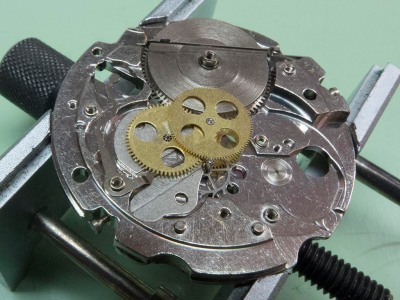 This was the only muck I found in the whole movement, an isolated occurrence on the third wheel.

The movement in its constituent parts ready for cleaning.

Once cleaned and inspected the rebuild began, the first job as usual was to start with the mainspring. I thought I’d walk you through the mainspring refitting procedure, this is the tool needed to fit a spring into its barrel nice and cleanly. Springs can be hand wound into their barrels but it’s hard on the fingers and you tend to end up with flakes of skin and muck under the spring and it all gets a bit messy. Once you’ve mastered the mainspring winder you’ll wonder why you struggled without one! 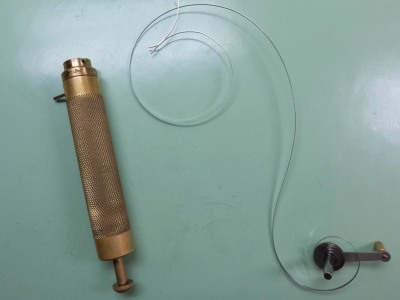 Mainspring winders come with various sized ends for different sized springs and barrels. Most 60’s and 70’s Seiko calibres can be refitted with the number 7 end. The spring is pressed onto the arbor where the tab engages in the hole on the end of the spring allowing it to grip and wind it. 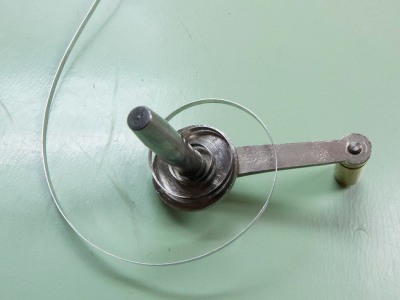 The winder is placed into the tools barrel. this has a moveable plate that can be depressed to eject the spring into the barrel when it’s fully wound. 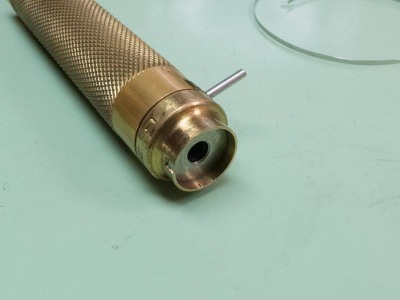 The winder is put in place ensuring the coil enters through the slot in the barrel wall, you then wind until the end disappears into the barrel.

Once fully wound in it looks like this from below, any particles that have stuck to the spring can now be cleaned with a piece of Rodico. 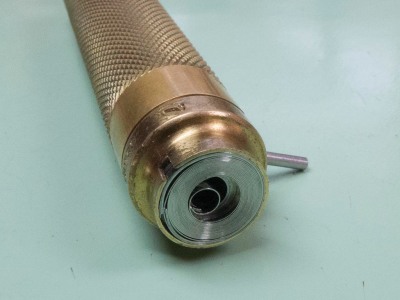 A coating of braking grease is spread around the barrel wall to lubricate and prevent the spring slipping to early during the winding process.

The tools end is then placed into the barrel and the button is pressed on the top of the tool to eject the spring.

The tool can now be removed.

The arbor is then lubricated and placed in the centre of the spring. The tab on the arbor has to be located into the slot in the spring.

The arbor is clipped into place and the spring is lubricated, if you’re fitting a new mainspring they come pre-lubricated and don’t need any more.

The last thing to do is close the barrel up with the cap. 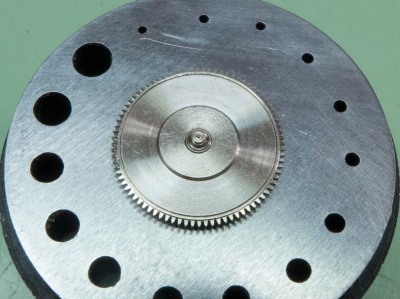 A very fiddly job on any Seiko with diafix shock protection is replacing the actual diafix caps and springs. These little blighters can ping off into the distance if your not careful and you’ll never find them again! My method is to lubricate the cap with the correct oil, remember the escape wheel and third wheel are located in these jewels and both take different oils. Replace the cap on top of the jewel and with the “fallopian tube” type spring standing upright locate each leg under the rim of the housing. 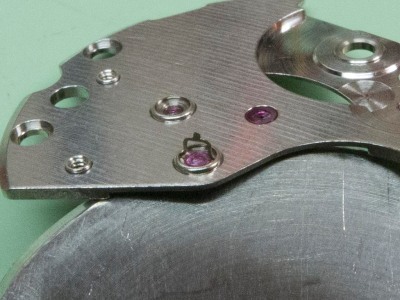 Fold the spring down and clip the tab under the rim so the cap is held in three places. It sounds simple but it took a long time before I became proficient at getting them in cleanly!

Repeat with the next one, remember the correct grade of lubricant!

The motion work’s coming together here.

The bridge has been refitted in this shot.

And the autowind assembly has been rebuilt and fitted here.

The calendar side coming together.

A shot of the kanji day wheel here.

The beautiful dial is refitted here.

A closer shot shows the linen type texture of the lume plots, a sure fire pointer to the fact this is the lume it left the factory with. You can also see the 700J T dial code at the bottom. 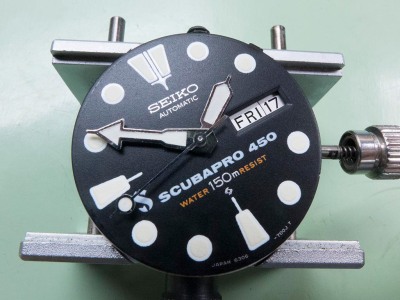 What an exemplary example of this rare 1970’s diver this particular watch is! 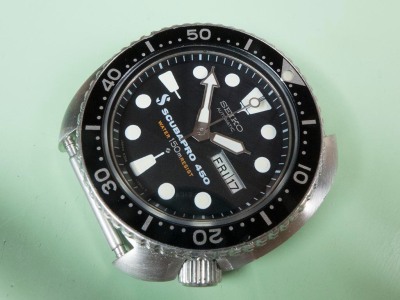