Accutron watches were developed by Bulova in the 1950’s in response to Elgin and Lips introduction of their electric watch. While their watches still retained an oscillating balance wheel to keep time Bulovas Accutron was driven by a tuning fork vibrating hundreds of times a second, meaning the Accutron was the worlds first electronic as opposed to electric watch. The genius engineers behind the miniturisation of the tuning fork concept which had been previously demonstarted in clocks were Swiss born Max Hetzel aided by William Bennett. By the time the Accutron was offered for sale to the public in 1960 the tuning fork was vibrating at 360 times per second and drove an index wheel via a pair of jewelled fingers. Each accutron coil has 8,100 turns of insulated copper wire at 0.015mm diameter which equates to 80 metres per coil! The Accutrons reliability is legendary and can perform flawlessly for decades with only the occasional battery change and service. Due to the unique operation of a tuning fork watch you can actually hear the watch hum whilst it’s running!

The Accutron featured in todays article was a 21st birthday gift for the owner in 1971 and has reliably provided him with time keeping until recently when the calendar mechanism jammed and battery life was down to about 5 months on a fresh cell. It’s powered by the calibre 218 movement. 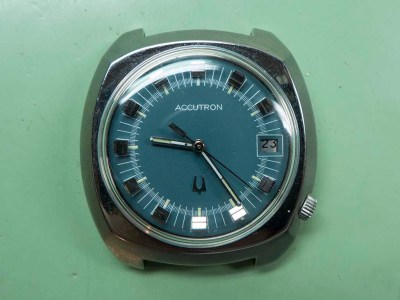 Accutrons are relatively easy to date, the caseback is stamped with two characters, the first letter denotes the decade, M for the 1960’s and N for the 1970’s, the following number is the year so you can see the one below was manufactured in 1971.

Now I’ve removed the caseback you can see the coils, circuitry and battery cell. When these were new they took a 1.33v mercury cell but these have long since been superseded by the 1.5v silver oxide type. The accutron can run happily with one of theses higher voltage cells although it will need to be rephased due to the increased amplitude of vibration of the fork. Don’t try to run one of accutrons on anything other than a mercury or silver oxide cell!

With the movement out you can see the lovely grey blue dial with the date stuck somewhere between the 23rd and 24th.

I removed the dial and hands…. 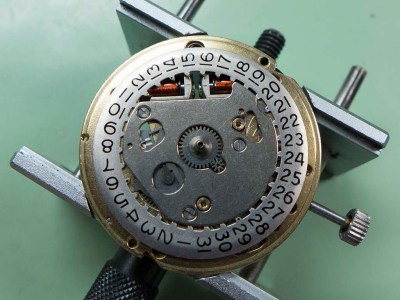 ….then the calendar cover plate which reveals the mechanism beneath.

With the calendar work out of the way there’s just the keyless work to go.

I removed that and the dial side was finished bar the top jewel plate and canon pinion, these will be removed after the motion work is stripped.

I’ve removed the main bridge in this shot so you can now see the relatively simple train beneath.

Once the wheels are out of the way you have a clearer view of the tuning fork. Note the tiny index and pawl fingers,  the index and pawl jewels are square blocks of synthetic ruby, 0.18mm square and 0.06mm thick. The index wheel that they push around is 2.40mm in diameter and has 320 teeth, each of which is about 0.01mm high and 0.02mm wide! 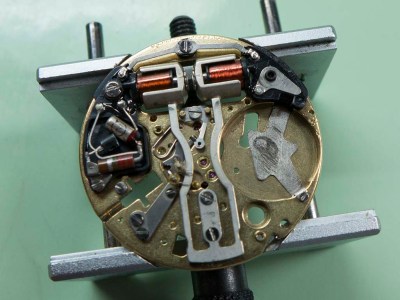 Nearly done now, just the hacking lever and suppresion spring to go. The hacking lever lifts the pawl finger away from the wheel to stop it being driven whilst the tuning fork continues to vibrate.

It was now ready for cleaning and inspection. The jewelled fingers are so delicate they don’t go in the cleaner with the other components for fear of damage, these are cleaned separately in an ultrasonic bath. 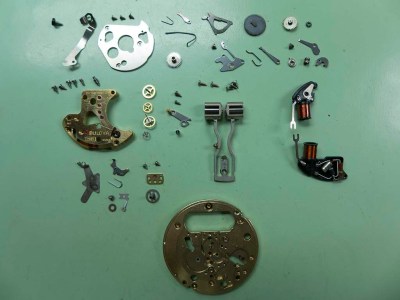 The rebuild begins with dial side, the canon pinion/minute wheel and top train jewels are fitted.

The hacking lever and suppression spring are next to go back….

….followed by the coils, tuning fork and pawl plate. 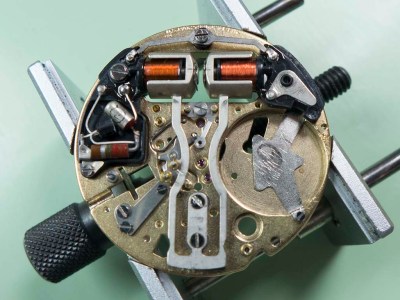 The pivot jewels are lubricated before the wheels go in as they are blind holes and can only be treated from the one side. The stem is replaced in the hacking position to keep the pawl finger away from the index wheel whilst fitting the bridge. 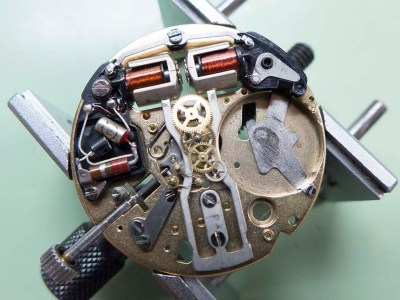 With the bridge fitted the motion work is finished, it just needs the indexing setting up (phasing) and regulating once it’s running again. 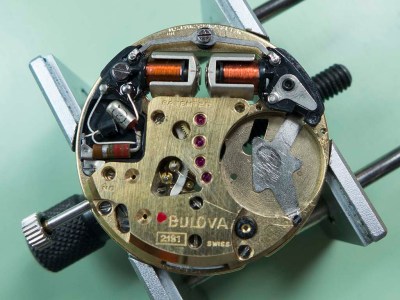 The keyless work went in next….

….followed by the calendar components.

The dial and handset was fitted next.

And the very deep crystal was swapped out for a lower one with a better profile.

The movement was recased and a new cell fitted….

….which meant the case could be closed up and the job was done. Barring any disasters it’ll be a good few more years before this needs another service!