This 6215-7000 was tackled recently and arrived in lots of small packages as can be seen from the picture below 🙂 It came in for the movement to be serviced and the rest of the components to be assembled. The 6215-7000 was Seikos first attempt at a 300m diver, launched in 1967 it featured a monocoque case and was powered by the calibre 6215 movement. This is an automatic wind, 35 jewel, 19,800bph hackable movement based on the 62xx platform. The monocoque case featured a screw down crystal retaining ring and a split stem. 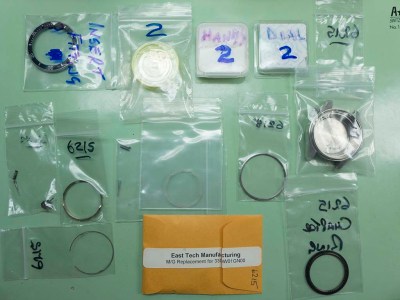 The movement is based on the 62xx calibre but has quite a number of differences to the 6205/6’s and 6217s. The calendar mechanism is the same as that which is used in the 6216/8, in fact the only thing missing is the day disc, it still has the day change finger and day jumper present.

The calendar components were soon stripped, you can see the brass hacking lever peeping out from the bottom of the slot at the two o’clock position. 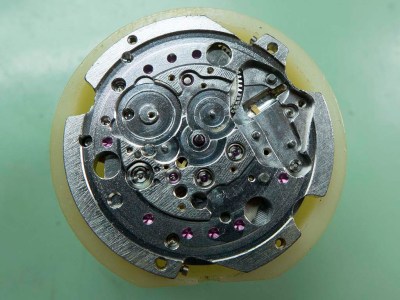 The movement was turned over to start work on the going train, note the jewelled barrel arbor.

With the train bridge removed you get a view of the barrel and third, fourth and escape wheels. This branch of the 62xx calibre is the only Seiko movement I can think of with a hacking lever secured by its own screw!

The movement was now ready for cleaning and inspection.

The reassembly started with the mainspring…. 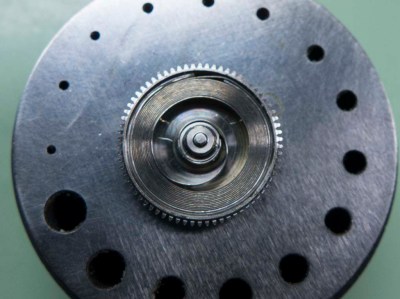 ….then followed the usual pattern.

The movement carries its own serial number as was the case with Seikos ‘higher end’ calibres back then. The balance is fitted with a rack and pinion fine adjuster. With this side completed and the rough timings done it was turned over and reassembly started on the dial side. 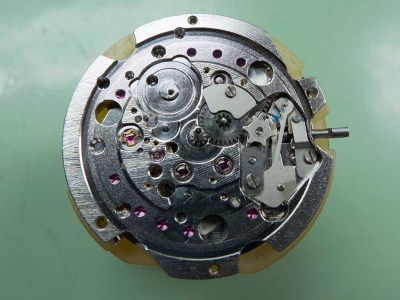 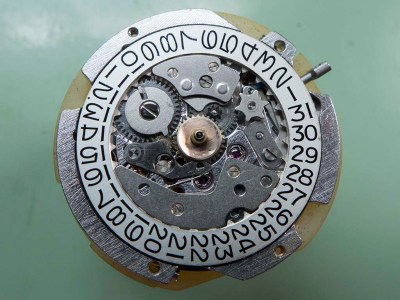 Once the dial was fitted the movement needed to be turned over….

….to allow the movement ring to be fitted. This can’t be done before the dial as it covers the dial securing screws. 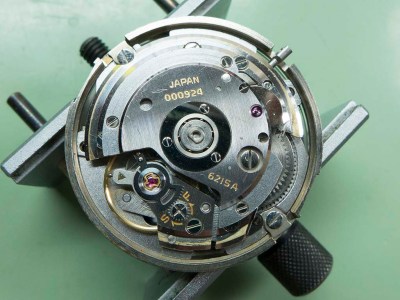 The old seal was dug out of the crown and replaced…. 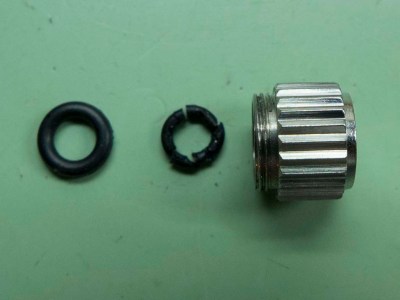 ….then it was reassembled.

The 6215’s crown arrangement features a split crown that leaves the crown attached in the case whilst the movement can be withdrawn. This is a bit of a weak spot and too much tightening of the crystal retaining ring can cause the movement to put sideways torque on the joint with the result it can feel notchy when setting the time and can in some cases spring apart!

The movement was then dropped back into the case after lining up the split stem of course. There is a large c clip located in a groove on the side of the cases aperture that is rotated to secure the movement in place. 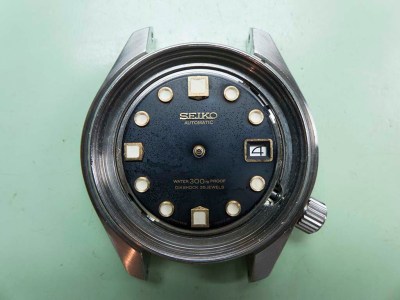 The handset and chapter ring is next to go on. 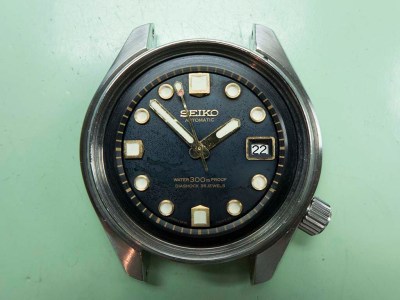 The other ‘weak’ point of the 6215-7000’s is the crystal sealing arrangement. The large flat seal sits on top of the chapter ring but apart from cushioning the movement from the crystal affords no moisture protection at all. This is all provided by the o-ring that fits between the crystal and the case. When the retaining ring is tightened down as the pressure increases on the large flat washer it tries to rotate and turn the dial and movement below it, in turn this is what puts the sideways torque on the crown joint. It’s little wonder that Seiko soon upgraded the 6215-700 to the 6159-7001 and iron out the weak spots. Of course the small production run makes the 6215-7000 significantly harder than the 6159-7001 to source (in itself not easy to find) and highly collectable!

The seals and crystal are now in place ready for the retaining ring to be tightened down. 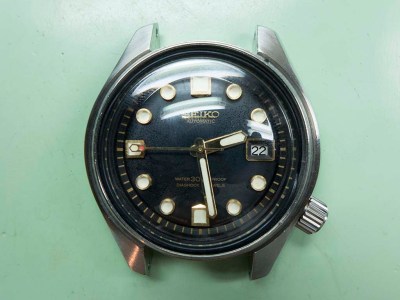 A peep at the back tells us it has a production date of April 1967. 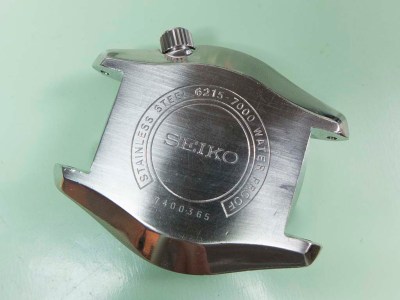 During the testing period an issue appeared with the date quickset. This is a notorious weak spot of the 62xx calibre and on this particular watch it meant that very occasionally the date wouldn’t advance using the quickset when it got to the number 7, it could be overcome by winding the date backwards to 6 and trying again but that’s not good enough so the movement needed removing to sort out the issue. The fault is due to wear in the date corrector and date disk teeth, however the date disks on these are particular to the 6215/6/8 and 6245/6 as they make provision for the depth of the day disk and consequently are hard (impossible) to find new. However the date corrector is used throughout the 62xx calibre family and I had some NOS ones in stock, swapping it out cured the problem. 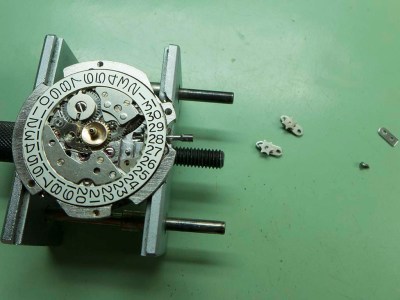 Once this was done the watch was completed and a fine looking specimen it is. I have another 6215 from the same collector to do exactly the same work to, what a lucky chap he is 🙂