My name is Duncan and this blog documents my ongoing passion with repairing, servicing and restoring wristwatches.

If you frequent any of the major (and some not so major) online watch forums you may recognise my user name thewatchbloke (formerly Cannop) from a few of them. I’m a brewer by trade and worked in the brewing industry for most of my adult life. I’ve always had a fascination with all things mechanical and have trodden the same path that many growing lads have done. Mine started as a child by building models which of course included utilising Meccano and Lego, then attacking (sometimes literally) Airfix and Revell kits. This progressed to building model aircraft that could actually fly out of balsa wood, tissue paper and cellulose dope. In addition to all this tinkering with models I was building my own bikes, dens and a magnificent 2 storey treehouse, we had a building site behind our house that provided plenty of scrap wood and broken pallets! I also amused myself by dismantling and attempting to put back together old valve radios, transistor radios, vintage lab equipment (oscilloscopes and the like) and television sets. As a teenager I progressed to restoring vintage motorcycles and cars, I tackled my first ground up restoration of a 1964 Royal Enfield Continental GT motorcycle when I was 14. 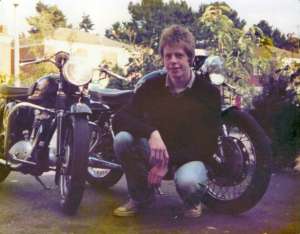 A young me with some of my motorcycles

By the time I was 17 the first car I ran after passing my driving test was a manual overdrive 1968 Daimler V8 250 that I bought from a friend of the family. I learned a lot about engines from that car having had to rebuild the V8 motor twice in quick succession as the crown of one of the pistons detached itself from the body (at speed) on two separate occasions! This led to far too many vintage cars and motorcycles over the years, however, I do believe I’m cured now.

My attention has been held by the humble (and not so humble) wristwatch ever since I got my first boys Timex at the age of 6. However my interest in finding what makes them tick has intensified for the past decade or so to the point where I now have my own little workshop crammed with the curious tools that watchmakers use. My profession now is servicing and repairing watches and I still can’t believe that I earn a living doing what I love!  I am still in awe of the fact that even at the cheaper end of the spectrum watches are incredibly resilient little machines that are built to amazingly tight tolerances and perform faultlessly for years before needing attention.

Leave a Reply to Alex B. Cancel reply