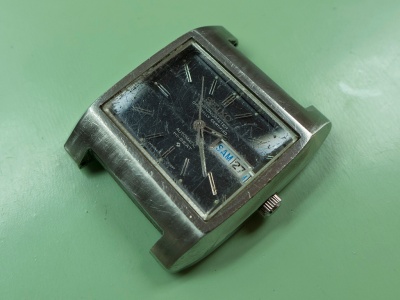 It’s screams 1970’s from every pore with its TV style dial, chunky case and faceted crystal. It’s powered by the 25 jewel, 28,800bph, calibre 5626a automatic movement. It also has the benefit of manual winding and hacking, the lower grade Seiko movements of the day tended not to have these features. These movements were a step up from the 21,600bph 5606a which normally found their way into Seikos Lord Matic range of watches. The 5625/6a was destined for the King Seiko range which also includes their line of “Superior” Chronometers which were produced at the Suwa plant, and “Special” Chronometers which came from the Daini plant. This particular model isn’t branded a King Seiko, but it is in all but name and has the legend “Chronometer Officially Certified” below the Seiko logo. The 56xx Chronometer was built to a specification of -3/+8spd and was certified by the in-house Seiko chronometer standard testing, the equivalent of the BO (Basel Observatory) Chronometer standard. A nice touch is that these chronometers were serialised with individual numbers engraved on the movement.

As can be seen this example arrived looking the worse for wear. The faceted crystal was very scratched and the case had been badly brushed and was quite marked. The movement wasn’t running and the day/date quickset wasn’t working, a common fault with the 56xx movement. However when you pulled the crown to set the time the hands wouldn’t turn, a not so common problem!

With the movement “cassette” removed from the main case it was apparent the dial wasn’t in too bad a condition although very grimy and covered in debris, but the lume on the hands was decaying and the hour hand had already lost some of it.

Further into the stripping of the movement and as can be seen from the pictures the movement was soaked in oil and grease, good in one respect as it prevents corrosion but it doesn’t do much for accuracy and timekeeping. Another nice touch is the jewelled barrel arbor. 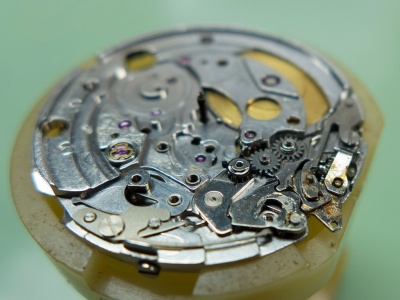 Another 56xx calibre oddity is the pallet fork. Normally the pallet fork travels back and forth across a straight line drawn through the escape wheel, pallet fork and balance wheel pivots (arrowed in red) and would be oscillating where the blue arrows tip is. However, due to the design of the mainplate there isn’t enough room for a large balance wheel if it was situated in the normal position, Seikos answer was to have an offset pallet fork, you can see the impulse end arrowed in green.

The watch was fully stripped ready for cleaning and inspection. 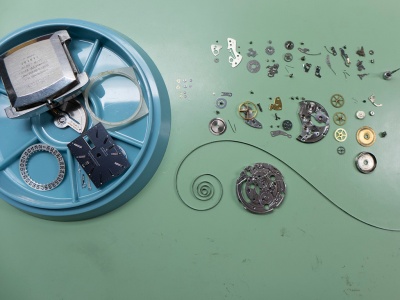 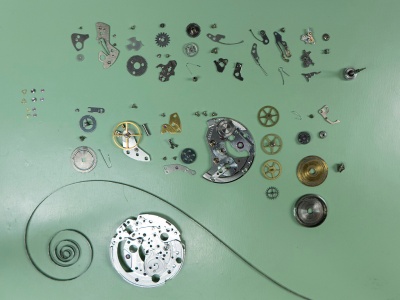 The components were all inspected and some issues were found which I’ll touch on later. The motion work was in very good order so the rebuild started, here’s the mainspring back in the barrel, properly greased and lubricated.

The motion work back together and ticking away healthily. The chronometer serial number can be see on mainplate above the regulators fine adjuster.

Once onto the calendar side a few issues came to light. The set lever springs retaining screw sheared when tightened back up so a new one was fitted. Also the set lever spring was missing which accounted for the crown not being able to move the hands in the set time position, the spring is there to keep the setting wheel meshed with the clutch wheel. Again a new one was sourced.

The next issue is one of the most common ones found in the 56xx calibre, namely the day/date quickset. The corrector wheel rocker has a four pronged plastic assmbled fitted to it that actually advances the day or date wheel depending which way you rotate the crown. These early plastic parts are prone to splitting and once they do the pronged section flops about and doesn’t rotate any more. What doesn’t help is if the watch is in the day/date changeover period of between 9pm to 4am and the quickset is used, this will force the plastic forks on the corrector to bend. The reason for this is the automatic date advance wheel is made from steel, so the plastic corrector was designed to flex out of the way in such circumstances to prevent any damage. Of course 40 plus years later the plastic is now brittle and doesn’t flex, the first you’ll know that you’ve messed up is when the quickset stops working so be warned! You can see the split in the defective corrector arrowed in red.

The reassembly continued and here’s the movement ready for its final component, the day wheel, to be fitted. 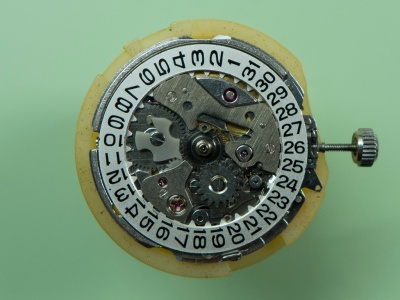 Once the movement was completed attention turned to the hands and the damaged and stained lume compound.

The old lume was removed and the hands cleaned. 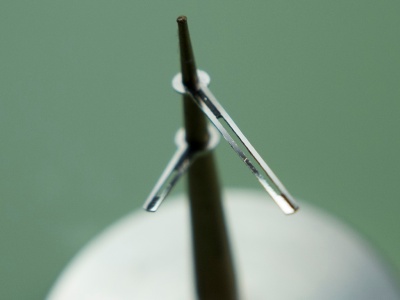 And a fresh lot was mixed and applied.

The case was lightly polished and re-brushed by hand, enough to soften the dinks and divots but not enough to lose the sharp case lines. The movement spacer was then fitted along with the dial, handset and crystal gasket. Another interesting feature of the 5626 calibre is the remote micro regulation adjuster (arrowed in red). On certain models (not this one) this adjuster is accessible from outside the case, this allows regulation adjustment without having to remove the movement as most of these models were front loading.

The assembly was then refitted to the cassette and the crown was silicone greased and installed.

The original crystal was a bit of a mess so a new one was sourced.

This was fitted and the case closed up. Quite a transformation with this one! 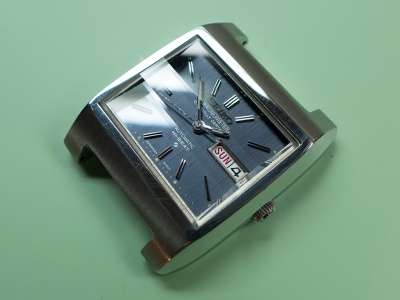