This Longines dress watch belongs to the father of chap who sent it in. Many years ago it was taken for a new battery to be fitted only to be told the movement was kaput and it needed a new one. It’s quite an attractive little watch with its gold dial, calendar wheel and baton hands.

A look at the movement tells us it’s a 6 jewel Longines L173.2 quartz, which is actually a Longines branded ETA 255.511. It also tells us that at some point the battery has leaked slightly and the movement is very dirty.

With the dial and handset removed you can see the typical ETA architecture of the calendar components. 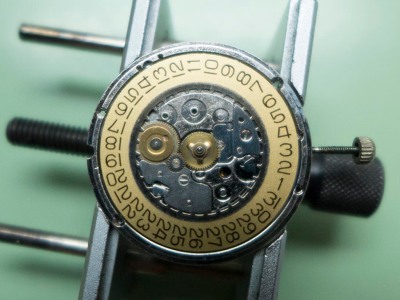 With a dead one of these quartz movements you have little choice but to replace the circuit board/coil, the problem with doing this is the Longines branding would be lost, not to mention the circuits are very difficult to source these days. However when I checked, the circuit was producing a pulse and the coil was working, this meant something else was preventing it from running. I proceeded to strip the movement down for a service as there was a high probability that dried out lubrication and/or dirt was the culprit. You can see the muck that’s leaked from the battery in this shot, this is also deposited over the motion work and with a quartz movement it takes very little to jam the train. 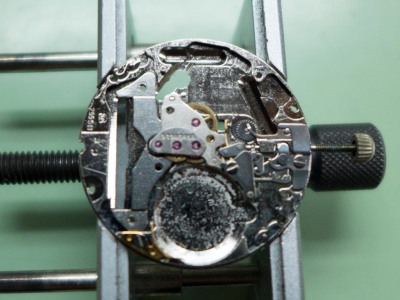 With the top plate removed you can see the wheel train beginning with the tiny stator on the left. The stator is the armature of a tiny stepper motor that is rotated in one second increments and is geared to turn the rest of the motion work.

Just the keyless work to remove then it all went into the cleaning machine, bar the circuit of course!

Once the components were clean and had been inspected the rebuild begins. In this shot the keyless work has been rebuilt and the train is ready for the top plate.

A little while later the new battery is fitted and she ticks again!

The calendar side coming together.

Ready for the dial and handset.

The fiddliest part of replacing the handset on a typical quartz movement is aligning the seconds hand with the markers, when it’s placed in position and lined up on a marker you can bet it will rotate on the pinion as it’s pressed home! It normally takes me a few attempts before I’m happy with it. 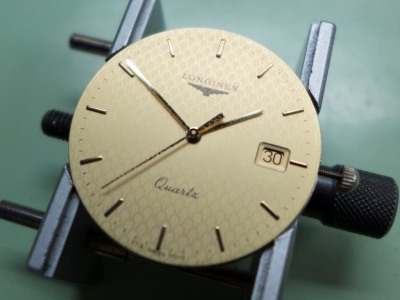 The case was cleaned and the movement refitted.

And there it is back in the land of the living, still with its original movement. 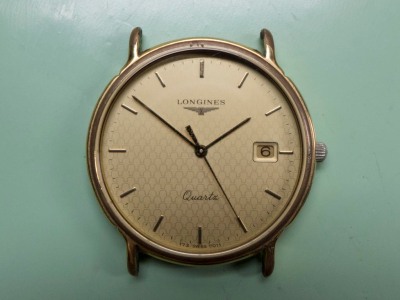 It’s nice that the watch is still original as it was actually a presentation gift back in 1988. AM, Area Manager perhaps?