This lovely gold Longines arrived recently for a touch of conservation and a full movement service. It dates from the early 1960’s and is powered by the Longines calibre 30L, which was available in a number of different grades. The 30L was the undecorated version, the higher grade the grade the more elaborate the decoration was (on both sides of the calibre) and they also utilised larger balance wheels. The top grade was the calibre 30Z which was used successfully in Observatory Chronometer testing. 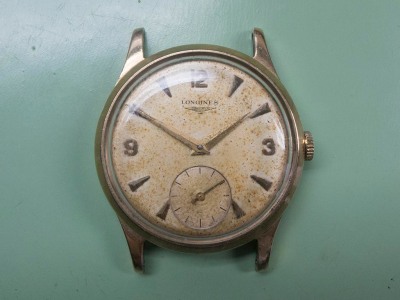 This particular watch belonged to the present owners grandfather and it was presented to him as a gift on his retirement by the company he worked for. He worked at Baker Perkins in Peterborough for many years, a company that is still in operation today and manufactures and supplies equipment for the food industry, namely bread and biscuit mixing and extruding equipment, industrial baking ovens and confectionery production equipment. It must have been a hard working life for him, he worked in the foundry department which would be tough enough today, but in the 50’s and 60’s there would have been a lot more health considerations with the dust and fumes. This is a picture of Frank at his furnace.

This is a picture of him receiving the watch on his retirement, he was barely 60 in this photograph but looks a lot older, I’m sure in part due to the type of job he had to do for many years.

There is no inscription on the rear of the watch, just a lovely plain gold snap on caseback.

With the back removed the cal. 30L movement is visible. Even though this was the undecorated version it still looks a lot more photogenic than a lot of todays movements.

The caseback is stamped with Baume, who was a Swiss watch manufacturer who made various cases for Longines, but it appears Baume had this case made for them by Dennison as the ALD underneath the hallmarks was the sponsors mark for Dennison cases. The ALD stood for Aaron Lufkin Dennison who pioneered watchmaking in America before moving to England in 1862 setting up a watch case factory in the Handsworth area of Birmingham. 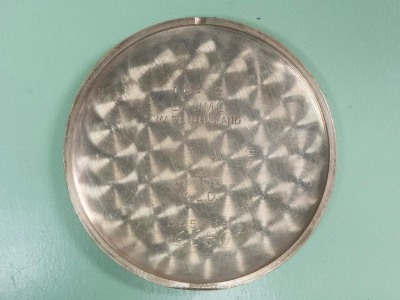 With the movement removed from the case we get a clearer view of the dial which was very stained.

With the dial and handset removed the keyless work is visible along with the hour wheel and balance top jewel poking through the plate.

A look at the motion work just before removing the balance bottom jewel. The movement is a manual wind, 17 jewel, 18,000bph affair with a weighted balance wheel and a sub seconds pinion. 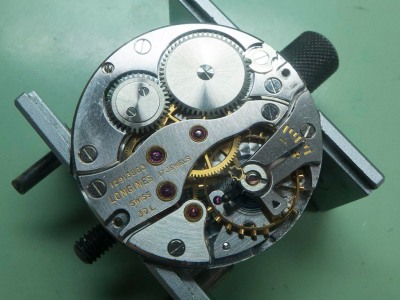 The movement was soon stripped ready for cleaning and inspection. 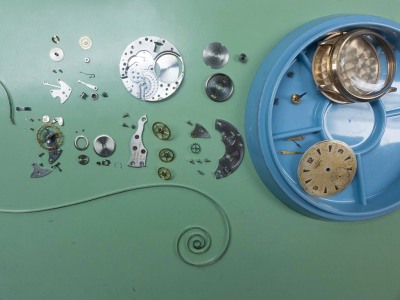 Whilst the parts were going through the Vari-Matic I turned my attention to the dial to see what could be done. It was heavily stained and I wasn’t sure if it could be successfully cleaned but plenty of cotton buds, spit and a lot of patience and it began to clean up nicely without any damage, here it is halfway through.

And here it is as good as it will go. There’s still a little spotting on the dial and the indicies have tarnished a bit, but most importantly its still original!

A new mainspring and crystal needed to be ordered so it was packed away until they arrived.

Once the parts were here the rebuild started, the new mainspring was the first thing to be fitted. As this is a manual wind there’s a little tab on the end of the spring that needs to be located in a slot in the barrel to allow the power to be successfully transferred. 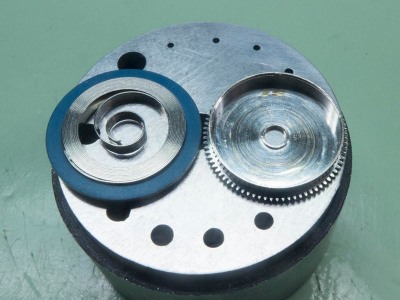 The motion work coming together here.

Bridges back on and ticking away.

The keyless work was lubed and refitted.

The cleaned dial and handset were refitted.

The movement was dropped back in the case and secured with the two tabs and screws. 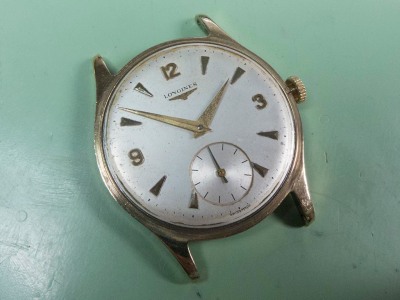 The new crystal was fitted.

A last look at the movement before the back goes on. 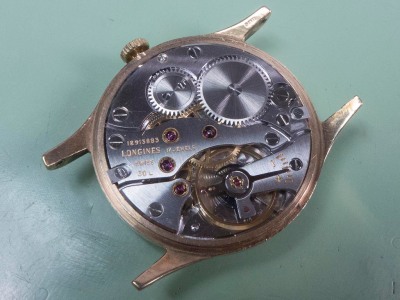 And here she is with the old components, you can see the broken off tang from the end of the mainspring.

Another lovely little Longines back in the land of the living!