This little calibre 11 Bulova came in for service recently. Bulova have been manufacturing watches since beginning of the 20th century but the founder actually opened his Jewellery shop for business in 1875 in Maiden lane New York City. Bulova have always been at the forefront of precision and technical development, and are best known for their Accutron range of watches that used a tuning fork instead of the balance wheel as the timekeeping element. The Accutron was released in 1960 and was the worlds first electronic wristwatch. Bulova also has a long history with NASA and provided timekeeping clocks and mechanisms for many space craft including the Apollo missions. Another little known fact is that Bulova produced the first official Radio advert to be broadcast in 1926 and the first official television advert to be broadcast in 1941. Back to the featured watch and as can be seen it’s a little three handed gents watch powered by a 17 jewel, automatic, 18,000bph movement.

Bulova used an unusual case design on these little waterproof watches, if you look at the rear there appears to be no way of removing the caseback. 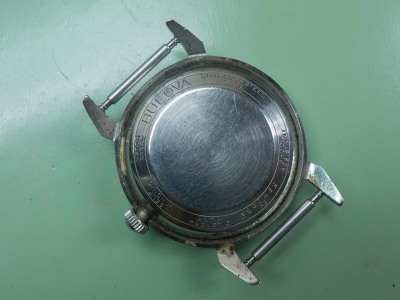 This is because the movement is housed in a module that is pressed into the crystal ring that supports the lugs. 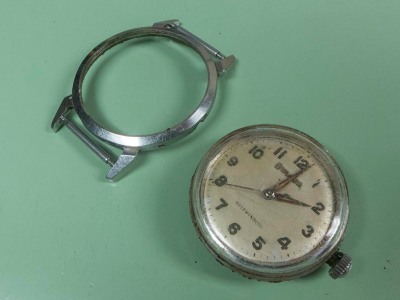 Once the crystal is removed along with the trim ring the movement can be removed. 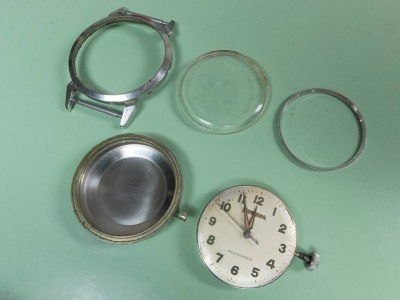 There’s evidence of some water ingress in the past as there’s a bit of rust staining on the top of the mainplate. 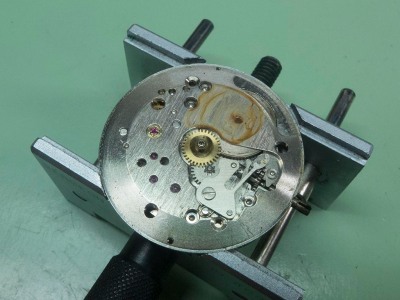 The motion work side looks quite well presented with it’s stylized “B” pierced through the rotor. The 11 AFAC on the rotor denotes it’s an auto sweep second movement.

The dial side was soon stripped.

With the Rotor removed you get a clearer view of the movement with it’s weighted balance wheel.

You can see the indirect driven second hand pinion with the top plate removed.

The movement was soon stripped ready for cleaning and inspection. 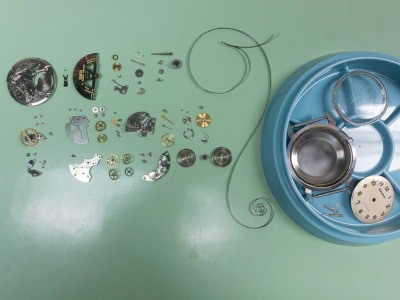 The dial was a little jaded but couldn’t be cleaned as this would have removed the printing, I just removed any loose particles and debris from the surface.

During inspection it was noted that the pinion on the balance staff had snapped off at some point.

A complete new balance was ordered.

You can see where the tip is missing on the original one.

When fitting a new balance you have to ensure the stud on the hairspring is in the same position as the original, on this one it wasn’t. 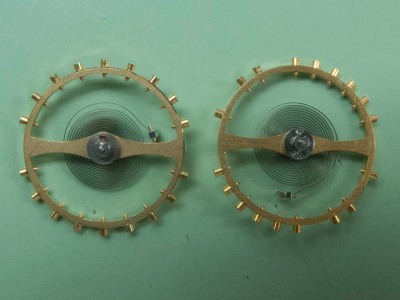 This means the watch won’t run as the impulse jewel won’t be in line with the pallet fork when it’s at rest, to remedy this the position of the stud has to be adjusted.

Once this is done the balance can be fitted to the cock. You have to ensure the hairsprings curve passes through the centre of the curb pins.

With the balance ready to be refitted the rebuild started in earnest, beginning with the mainspring as is usual for me.

The barrels cap has the legend “Do not open” engraved on it! 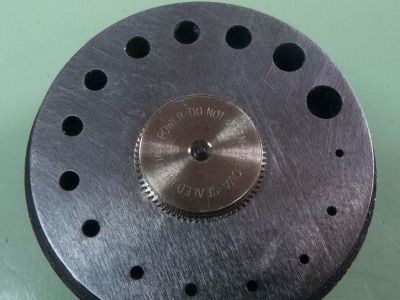 The motion work’s coming together here. 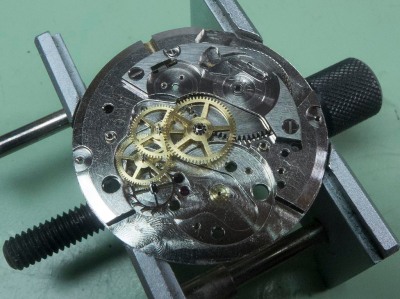 Ready for the new balance in this photo.

And ticking away nicely here.

The keyless work was refitted.

The dial and hands were then reinstalled. The movement was replaced in the case and the trim ring fitted but I then needed to do something with the crystal as it was very scratched.

I was hoping I may be able to polish it to be able to keep it with the watch but it was actually cracked halfway around its circumference. At least I now know where the moisture got in!

A new crystal was ordered…. 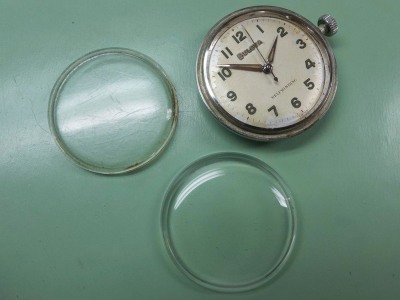 The module was then ready to be pressed into the case.

The watch was now finished. The case has distinctive horn lugs that to remind me a little of the Bulova tuning fork logo! A charming little watch I think.