I’ve written about the Omega Speedmaster before so I won’t delve into the history but it’s nice to have a pre moon one on the bench with the original calibre 321 movement inside. This one dates from about 1967 according to the serial number and as such is know as the ‘pre moon’ because it pre dates the Apollo moon landings. This example came in for a spruce up, a service and to sort a couple of niggles.

The caseback has been engraved at some point in the past and the Hippocampus logo is a little worn but this is to be addressed whilst it’s here. 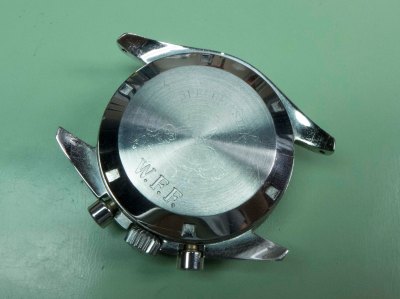 With the caseback removed the earlier pressed steel cover is still present as opposed to the soft iron of the later ones.

Remove the cover and we can see the movement, which looks to be in pretty good condition considering it’s getting on for 50 years old.

Once I’d uncased the movement  I could have a proper look at the dial and hands, not too shabby at all.

With the dial and hands removed you can see some of the lever work and keyless work. 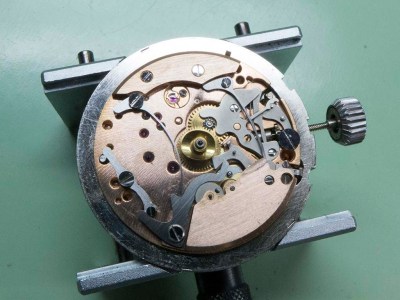 I turned the movement over to make a start on the chronograph side.

I firstly removed the balance and put it to one side then the centre and minute wheel bridge was taken off.

The reset lever and centre wheel was next to go….

….then the coupling lever and wheel.

I made sure the power was off then turned the movement over to remove the top barrel bridge, lever work and keyless work. 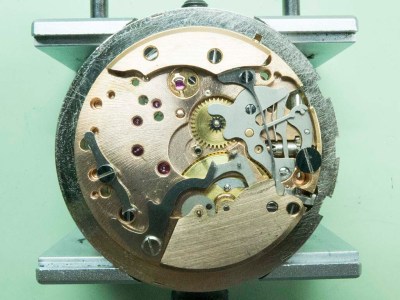 With the balance top jewel removed this side was done. You can see the 12hr drive wheel with it’s clutch spring through the hole in the plate, this needed adjustment as the watch was suffering from chrono creep. 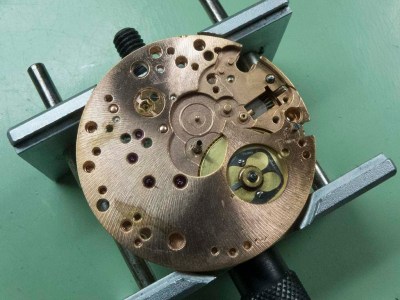 Once I’d turned the movement back over the stripdown continued, here it’s ready for the train top plate to be removed.

With it removed you can see evidence of over oiling which had got onto the ratchet wheel. 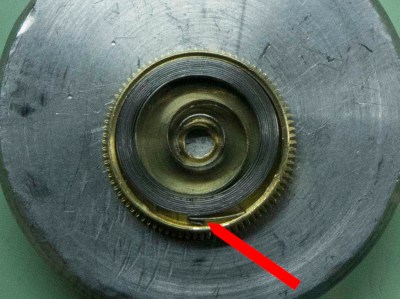 With the barrel stripped the movement was now ready to go through the cleaning machine.

Whilst the components were cleaning I tackled the case jobs, a new crown was the first thing to do.

A new crystal and bezel was next to be fitted but in doing so I saw a fault I’d never come across before.

I fitted the new crystal making sure the underside was spotless, once it was in place I went to clean the outside and found a piece of lint that needed dusting off.

When I gave the top a clean and it didn’t budge I thought it must have got attracted to the bottom of the crystal, so I checked the underside once more. Nope it wasn’t there either, the piece of lint had actually been manufactured inside the acrylic of the crystal, no wonder I couldn’t clean it off! That meant this had to go back and a new one was ordered. 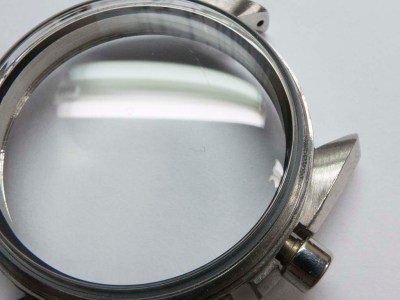 As I couldn’t continue with the case I started the reassembly beginning with the new mainspring. 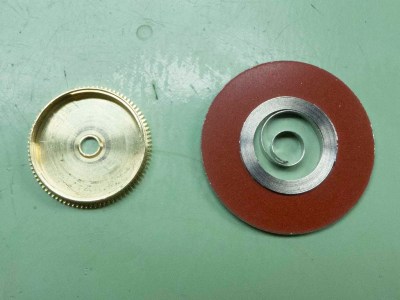 The motion work was next….

….followed by the bridge…. 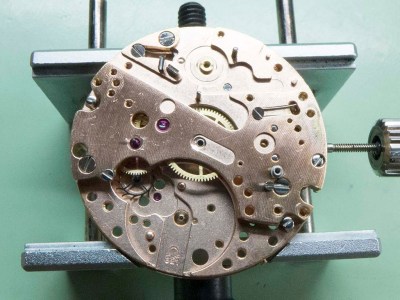 ….the movement was then turned over and the barrel bridge was refitted along with the keyless work to allow power to be put on the train ready for testing. It’s no good putting all the chrono work back on if there’s a problem with the train as it all has to come back off again to investigate!

The movement was turned back over and the balance and pallets installed then it was powered up and tested. The beat error was quite high so this was adjusted back down by rotating the hairspring collet, a bit of a fiddly job.

With the movement now performing nicely the rebuild continued….

The penetration of the chrono seconds wheel finger into the intermediate minute wheel needed adjustment as another of the niggles was that the minute counter wasn’t counting up.

It was then left running for a few hours with the chronograph disengaged to check the 12hr registers creep was sorted. It’s pointless putting the dial and handset back only to have to strip it all again if it needs further adjustment! 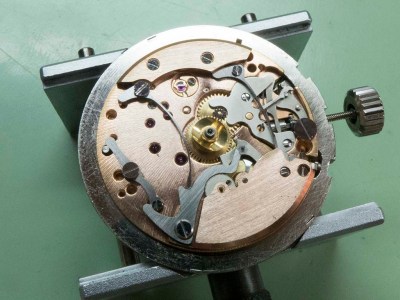 Whilst this was happening the replacement crystal was fitted…. 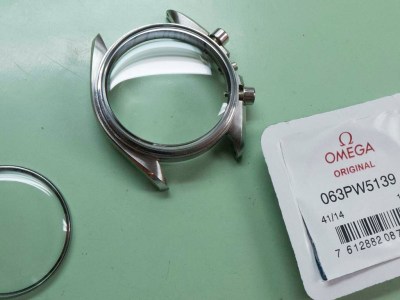 ….making sure the Omega symbol is positioned correctly.

The chrono creep was a thing of the past so after testing the dial and hands were refitted, there’s not much clearance between the hand stack on these calibre 321s. 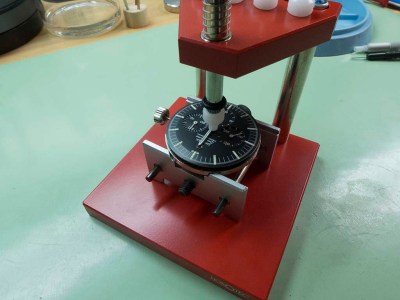 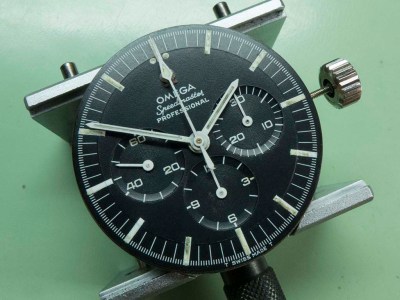 The movement was recased ready for….

….the replacement caseback, all quite acceptable as all the old parts will remain with the watch. 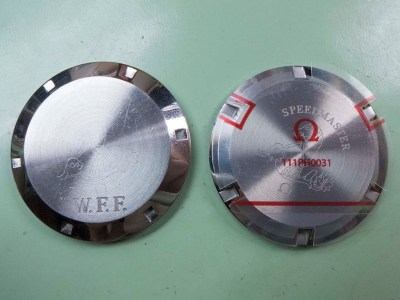 The new bezel was then fitted, not a dot over 90 one but again the original will remain with the watch so no problem there.

And that’s it, all done. I enjoyed working on this one immensely! 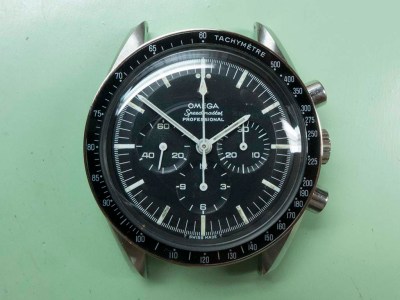 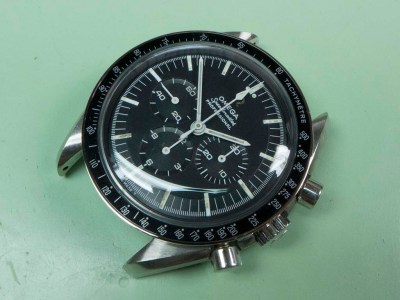 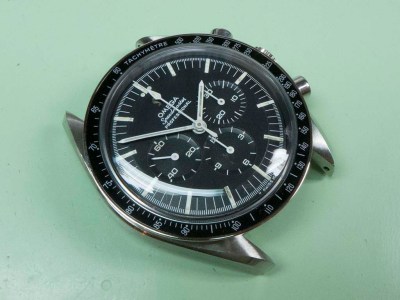 And a shot with all the original parts for good measure. 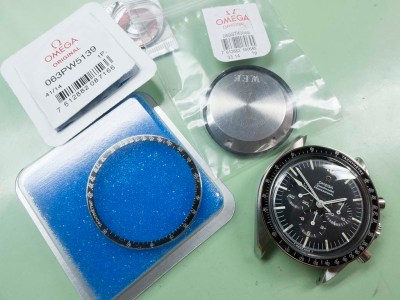