Hands up all you vintage Seiko dive watch enthusiasts who remember this one? I certainly do, when it appeared on ebay last year I was inundated with requests for information for the duration of the auction! Some people were a bit coy and showed me a few photographs saying they “had the chance of purchasing a 6159 diver that was in pieces”, others were more candid and said “this 6159’s on ebay, what do you think?” Looking at the picture below it actually looks quite reasonable, probably in need of a relume you may think. 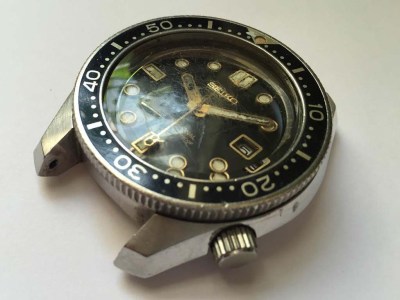 However in this picture things aren’t quite so cut and dried….

….and in this picture the true story becomes apparent! I told everyone who contacted me the same thing, it appeared to me that all the parts were present bar a couple of screws, however the fourth wheel had it’s pinion broken off and the female portion of the stem was broken. I also said that I couldn’t be sure all the train wheels were genuine 6159a ones or even that the balance was correct. With a high beat movement the tooth count on the wheels is considerably higher than on a lower beat one and if they weren’t correct 6159a parts then tracking down replacements could prove very difficult. Anyway the auction ended and it all went quiet until February of this year when out of the blue the winner of the auction ( who hadn’t contacted me previously) got in contact and asked if he could send me what he had and see if I could do anything with it. Never one to shy away from a challenge I made him aware of the parts he would definitely be needing and he started the search for them and sent me the watch. 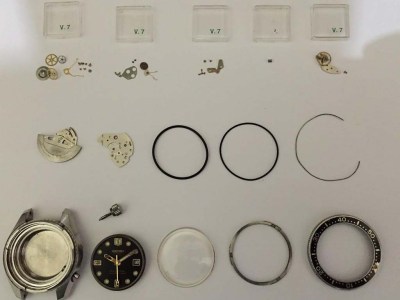 When it arrived it turned out to be a smooth backed (some 6159-7001’s have a groove machined around the horseshoe) example from February 1969.

The dial looked to be in reasonable order but it would need a relume so I commenced operations by tackling that first.

The old compound was gently dug out….

….until all the wells were clean. 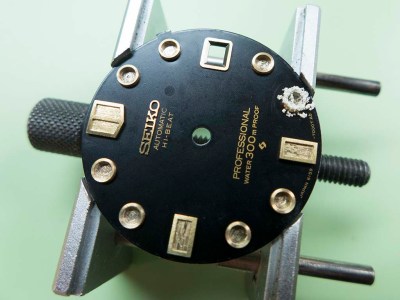 I then mixed up some compound and proceeded to fill them up.

I also did the handset whilst the lume was mixed.

The dial and handset are done in this shot with just the red stoplight on the seconds hand to do once the white had dried.

When stripping the movement completely I found that all the parts were actually genuine 6159 ones (phew), however it transpired that the canon pinion, centre wheel and fourth wheel pinion (which had broken off from the fourth wheel itself ) were rusted solid. I managed to get them separated but the centre wheel and canon pinion were in very rough shape and the tip broke off the fourth wheel pinion. The force I had to use to separate them also shattered the centre wheel top jewel and dished the mainplate, it was all very, very corroded and very, very stuck! 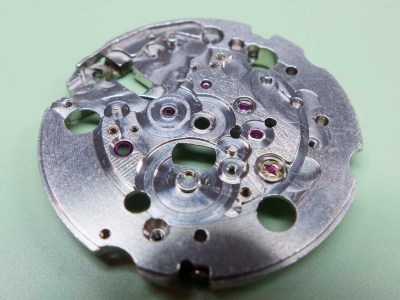 With the watch completely stripped now the first job was to flatten the dished mainplate which was done with the staking set.

A replacement centre jewel was harvested from a 6117 mainplate….

This was cleaned and offered up to the plate….

….then it was placed in the hole and pressed home flush with a Seitz jewelling tool. 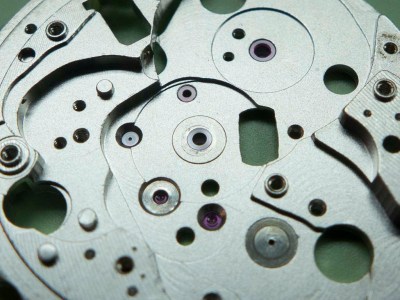 The next issue was the fourth wheel. Whoever had partially stripped the movement had somehow managed to pull the wheel from the pinion, probably due to the corrosion.

The wheel itself is very difficult to source and at first I thought I may be able to stake it back together, but when the tip broke off during extraction that put paid to that idea. There is a way around the problem however and although the tooth count on the wheel is higher on the 6159 fourth wheel, the pinion leaves and pinion length are identical across the 61xx calibre range so I harvested a good pinion from the trusty 6117 donor movement. 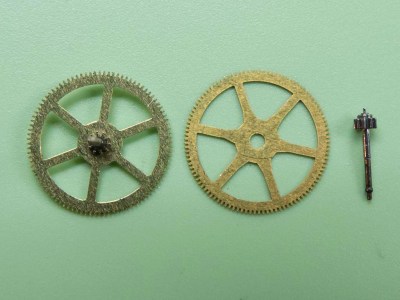 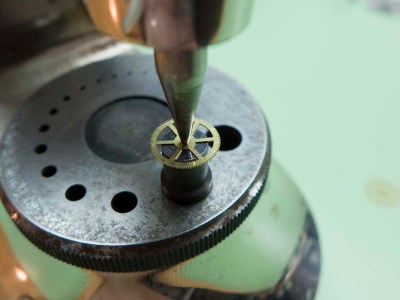 It worked a treat 🙂

Another victim of the seized canon pinion was the wheel on the underside of the quick setting lever. A couple of teeth had been sheared off no doubt due to an attempt to free up the seizure using the crown. All that happened was these teeth stripped off and the stem snapped!

The last issue was that the bottom pivot was snapped off the balance staff. This was probably cause by the balance assembly being stored loose with the rest of the parts, it doesn’t take much effort to knock the pivot off in those situations. 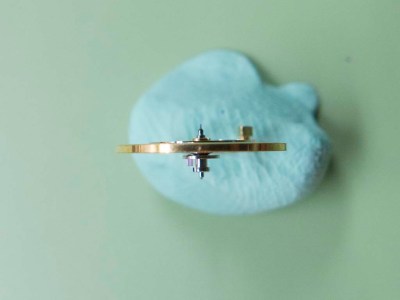 I thought I’d try and fit a new staff (actually one harvested from the 6117) and see if I could rescue what was there. The problem with Seikos of this vintage is the brass balance wheel normally suffers when removing the old staff due to the way they are riveted together. Anyway I stripped the 6159 and 6117 balances and made a good one out of the two. Obviously I had to use the 6159 balance wheel, hairspring and roller table and the 6117 staff. 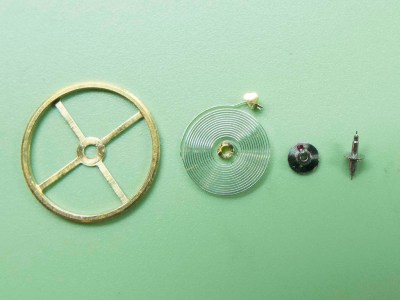 I staked it together and checked the poise…. 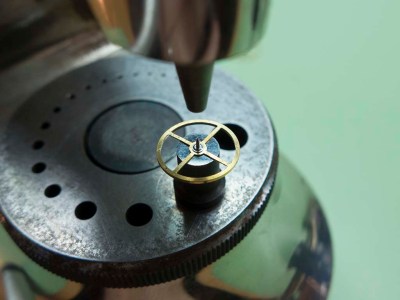 ….refitted the roller table and hairspring….

…and refitted it to the balance cock. I also adjusted the hairspring concentricity and curb pin gap. Once all the parts have been cleaned and reassembled we’ll see how it goes but I’ve done this operation a few times and have only been successful twice! Always worth a try though 🙂

The crown was given a new seal and the stem was refitted with a new female end. 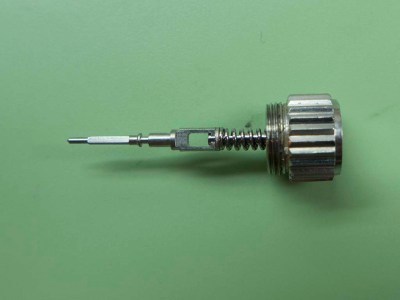 By this time everything was now ready for cleaning. 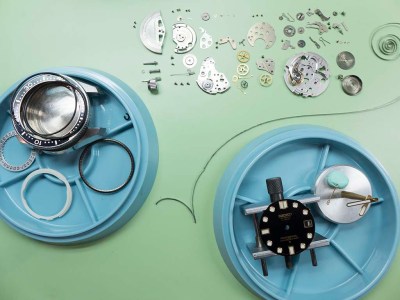 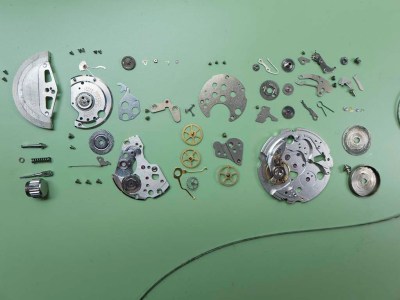 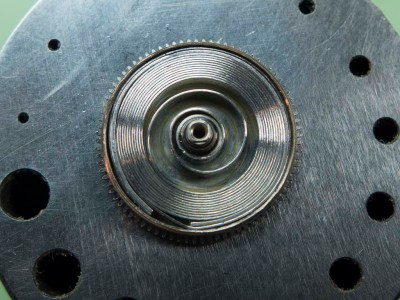 The wheel train and hacking lever went in…. 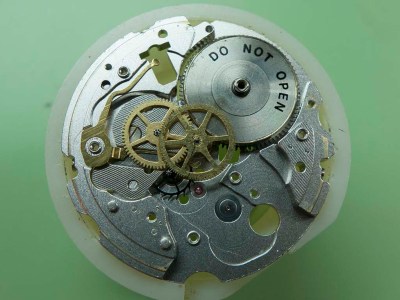 ….followed by the train bridge…. 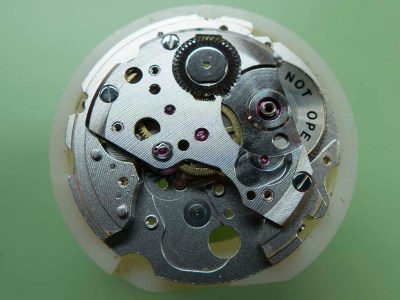 ….and the pallet fork and bridge.

The movement was turned over and the motion work and calendar mechanism was rebuilt…. 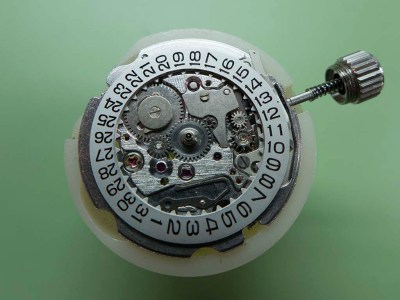 ….and the top plate was refitted.

The re-staffed balance and cock was fitted and the watch was put on the timing machine. It started out ok but then the amplitude would suddenly drop to about 100 degrees for no apparent reason. After a while it would jump back up and stay there, then it would drop again. I knew exactly what was happening having been through this in the past, the balance staff was slipping in the balance wheel. The brass of the wheel is very fragile and it doesn’t take much for it to be minutely damaged or fatigued when the old staff is removed, this meant that when the replacement staff was fitted it wasn’t gripping correctly. It’s futile persevering with trying to tighten it up, I’ve wasted hours in the past trying to rectify this problem to no avail.

The watch was packed away whilst a NOS replacement balance was sourced.

Once that arrived it was fitted, curb pin and concentricity adjustments made and it burst into life with no issues whatsoever. 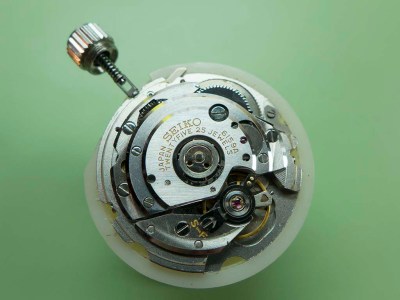 The rotor was then attached….

….and the dial and handset was refitted.

The movement was recased, the chapter ring and crytsal seals fitted….

….and a NOS crystal topped it off. Knowing what the owner actually paid for this and knowing the cost of the restoration work I think he’s done very, very well! Fortune favours the brave as they say 🙂 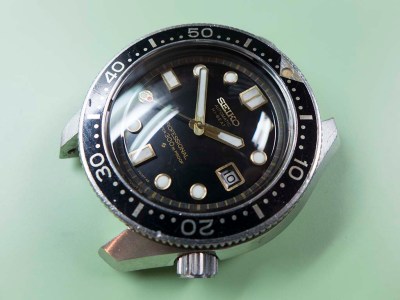