Seikos Marinemaster Automatic Professional 300 SBDX001 is the grandchild of the original 300m professional Seiko diver, the 6159-7001 that debuted in 1968, and it’s looks are strikingly similar to it’s historic ancestor. You can see the MM300 that’s the subject of this post next to my 6159-7001 below.

In the year 2000 Seiko released the SBDX003 in a limited edition of 500 pieces and this model is even more similar to the original due to the fact it uses gold hands and accents on the dial.

In January of this year Seiko released the SBDX012 to celebrate 50 years of making dive watches, this is is another dead ringer for the 6159-7001.

Going back to the MM300 in question, this one came in because it had been dropped and had stopped running. The hands couldn’t be adjusted manually either so as you can see it was stuck at four minutes to eleven. I think it must have been dropped onto a wooden floor as I couldn’t see any sign of case damage whatsover! 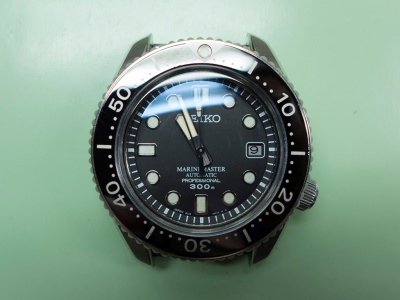 The bezel on these is a typical Seiko affair held on by an o-ring, once it’s off you can see the click spring underneath. The MM300 also has an unusual crystal system, the crystal is held in its own “cassette” for want of a better word. To remove the crystal you undo the top thread locking ring as normal.

To remove the movement however you undo the outer locking ring and the crystal is retained in its assembly as can be seen in the picture below. Beware though, the thread is a left hand one so it’s turned clockwise to loosen, this is good engineering practice where there are two components that have to be tightened up against each other like this because it prevents the crystal becoming locked in its cassette through over tightening. A point to note is earlier (pre 2008 I believe) MM300s have no notches on the movement retaining ring to allow a normal case opener jaws to grip and needs a special tool to undo it. 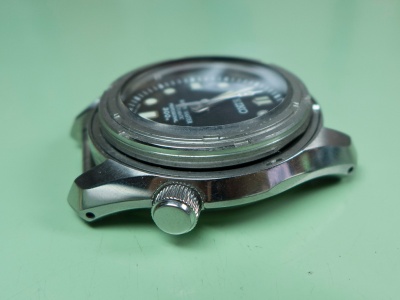 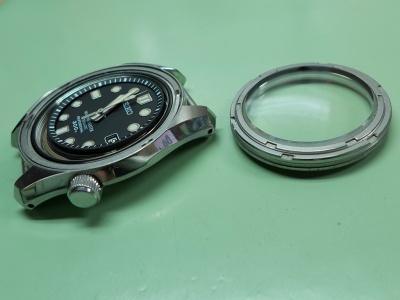 Once the crystal assembly is off the stem and crown can be removed and the movement taken out.

From the description of the problem I was hoping that after the watch was dropped the reason the movement had stopped would be due to the hands moving together on the horizontal plane and becoming locked together. Of course this wasn’t the case so more investigative work was in order! With the movement turned over the next job was to remove the balance and see if there’s any damage to the impulse jewel and pallet stones that could have cause the balance to lock. 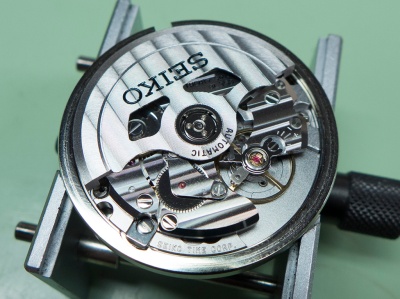 The impulse jewel looked fine and from what I could see the pallet stones were also in good order.

It seemed the power from the mainspring wasn’t being transferred to the escape wheel, there was no pressure on the pallet fork, it just moved from left to right without the escape wheel advancing. I needed to take a look at the wheel train now and this was where the next problem reared it’s head, namely the nut for the rotor. As can be seen it’s a non standard type with three holes drilled in its circumference ready for a suitable tool to be fitted to undo it. The problem was I didn’t have a suitable tool!

This is where a good friend of mine John Bentley came into play. I’m sure John is actually half man half lathe, some of the custom components he’s produced are very impressive and he’s also the producer of the fantastic Seiko TST conversion. So I emailed him the measurements of what I needed and a day later this arrived in the post.

I cut some 0.5mm stock down to length (a screwdriver blade)….

….apply a dab of silicone grease to each section and slid them into the holes in the tool. Locate the three lugs into the nut….

This allowed me to remove the autowind gear, let the mainspring down and remove the pallet fork. I could now continue to diagnose what was jamming the train.

It appeared that when the watch was dropped the centre seconds wheels teeth had been dislodged above the teeth on the third wheel and had become jammed. As the third wheels bottom jewel was undamaged I decided the best course of action would be to slacken the bridge screws, nudge the seconds wheel to allow the teeth to mesh again and then tighten back down. I removed the ratchet wheel first and slackened the screws, the wheels then remeshed and the train span freely again.

I reassembled the movement with some fresh lubrication where required, gave it a wind and it began ticking away merrily. A test on the timing machine demonstrated there was no further damage to the escape wheel or pallet forks. What a gorgeous looking movement the 8L35B is, 28,800bph and 26 jewels with all that lovely finishing work that can never be seen. 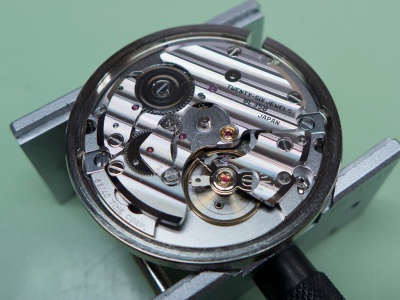 The rotor was refitted with my new tool…

….and it was ready for recasing. 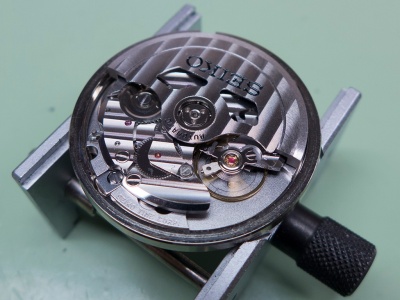 I fitted the crown and stem to check the hands moved freely and that’s where the next problem became apparent, the date wouldn’t move using the quickset feature. When the hands were advanced it also felt very notchy when the date clicked over at midnight so there was further work to do.

The dial and hands were removed which revealed the calendar top plate. It appears Seiko is using more cross headed screws these days as there are four holding the plate in place.

The plate was removed which revealed the quickset and calendar mechanism. The date ring and quickset lever were removed and as can be seen the date corrector was jammed against the plate. The watch must have had some jolt!

The date corrector had sprung apart so it was clipped back together, lubed and refitted.

In addition, the quickset lever wouldn’t move correctly when the crown was pulled to the first position, this was due to the locating pin (arrowed)….

The dial ring and top plate were refitted….

….and the dial and hands were next. 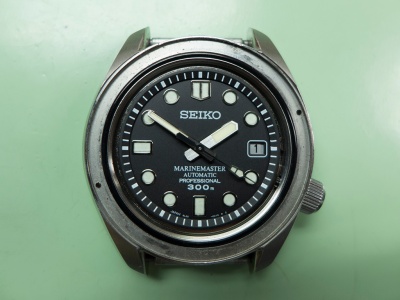 The crystal assembly was screwed down.

And the bezel and spring was pressed home to finish the job. What a cracking watch the MM300 is. 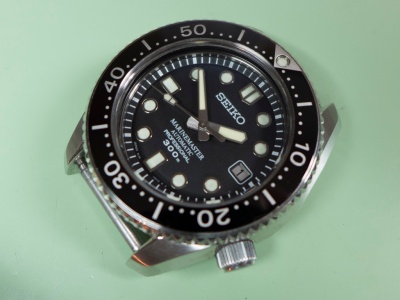