This Seiko Sports 7546-6040 recently came in for some refurbishment, it belonged to the current owners father and hadn’t run for many years. The Sports range of Seikos look like dive watches but are only resistant to 100m and carry a different logo on the caseback, a more stylised wave than the tsunami of the divers watches. This example was in need of a bit of TLC, the crystal needed replacing as well as getting it going again and servicing the movement.

The different wave logo can be seen on the caseback as well as a production date of October 1978.

Once opened up things didn’t look too good with the discolouration around the battery area.

The caseback bore witness to where the battery had leaked years previously, this article should serve as a lesson in not leaving dead batteries in watches if you can help it!

The date wheel has been discoloured by all the nasty vapours that escape when a cell leaks. You can see the periphery of the mainplate doesn’t look too healthy either.

The calendar top plates are also stained by the battery, it gets everywhere as there’s no means of escape for all the noxious elements/gases that leak out.

With the calendar side stripped the extent of the staining can bee seen.

The circuit and coil were removed revealing a mess on the mainplate.

Fully stripped it was going to need some attention before going into the cleaner. If you ever have a problem like this instead of trying to scrape the corrosion of with scrapers and fibrelass pens or whatever try putting it in a glass of white vinegar for 20 minutes or so. If you have an ultrasonic bath place the glass in that and give it a zap.

This is how it comes out of the vinegar before the trip through the cleaning machine.

The watch was now fully stripped and went for cleaning and inspection.

Another couple of victims of the leaking battery was the coil and circuit so a replacement set was sourced. On the damaged pair you can see the black corrosion on the underside of the trimmer and down the brass tracks. The coil’s wire was rotted through.

Reassembly started with the motion work, hacking lever and coil.

The circuit was fitted, the stem replaced and a new battery fitted, the movement then sprang into life once more.

The calendar side was rebuilt….

….and the dial and hands were refitted. Considering the rest of the damage these have survived in remarkably good condition. 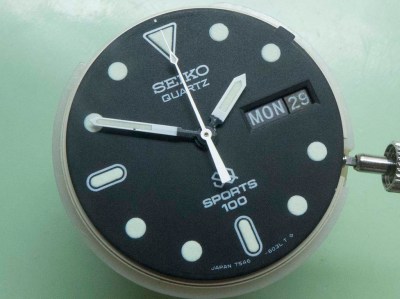 A new crystal was sourced and fitted. With this design of case the crystal is secured by a rubber gasket in the crystal ring and a black anodised inner ring pressed up from underneath. This assembly is then pressed into the case and held in place by a nylon ring, to remove it the chapter ring has to be pressed out which takes the crystal assembly with it. The problem with this method is the chapter ring generally gets covered in particles as it’s removed. When I used compressed air to remove these particles the battery gases had made the ink so soft that just blowing the chapter ring was enough to smudge it – another victim!

A new one was sourced and refitted. 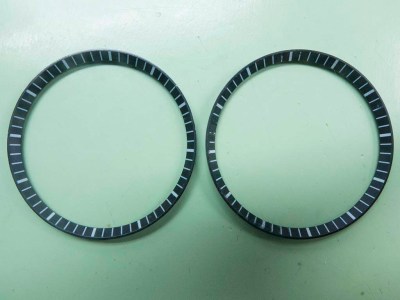 And the crystal assembly was pressed back in.

The movement was recased and the watch lives again, considering what it’s been through it’s turned out beautifully! 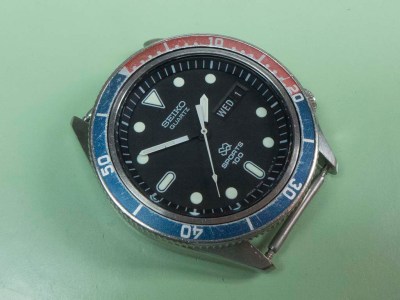