Omegas Speedmaster watches have to be one of the most iconic chronographs that have ever been made. From it’s introduction in 1957 to the present day the design has changed very little, an original CK2913 speedy is still undoubtably related to every model that came later. The movement changed throughout the years starting with the column wheel calibre 321, in 1968 the cam lever calibre 861 was introduced and in 1977 some small modifications were made and it became the calibre 1861. In more modern times movements based on the F. Piguet 33xx and the Omega calibre 9300 have been utilised. Of course the Speedmaster shot to fame with NASA choosing it as their official watch certified for space flight in 1965, and it was taken to the moon on a number of occasions. This fact is celebrated on the back of Speedmasters produced since then with the legend ‘First Watch Worn on the Moon’ engraved on the back. This 1977 example came in for a movement service, it was also suffering from a fluttering seconds hand and chrono creep on the hour register. 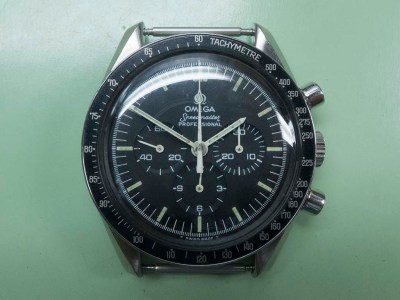 The caseback with Omegas hippocampus and that famous engraving.

And a view of the Lemania based calibre 861 movement.

A shot of the classic Speedmaster dial and hands. The paint on the hands of this particular example was very fragile, you can see where it has been lost around the pinion area during previous services. 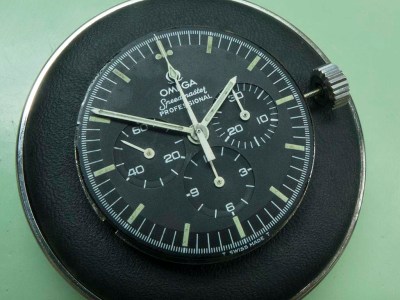 Underneath the dial is the keyless work and the reset and brake for the hour recorder.

In this shot with the bridges and brake removed you can see the hour register wheel is driven directly from the barrel arbour. 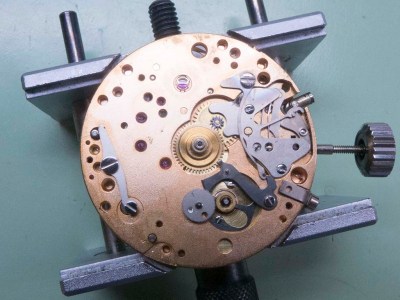 The dial side is fully stripped here.

Turning the watch over work started on the motion work side, to reach it all the chrono levers and wheels have to be removed. 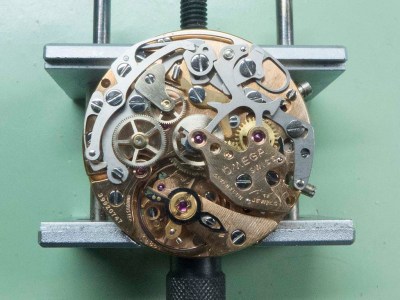 The balance and chrono bridge are removed first.

Then the levers are stripped.

Then the wheels and brakes are next leaving the motion work bridge ready to be removed. 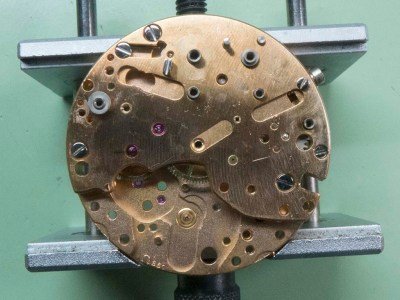 Once that’s out of the way the wheel train is visible. 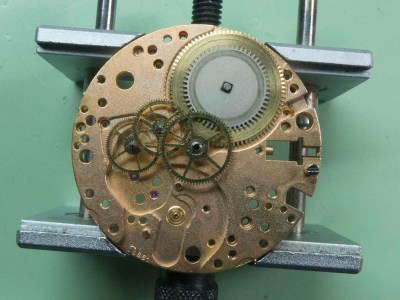 The watch was now in it’s constituent parts ready for cleaning. 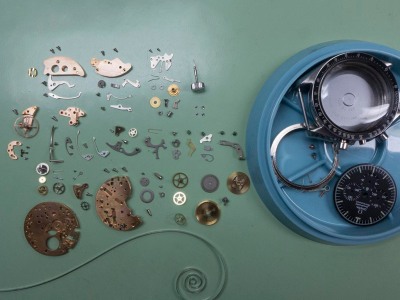 One problem found during inspection was the tang had broken off the end of the mainspring. 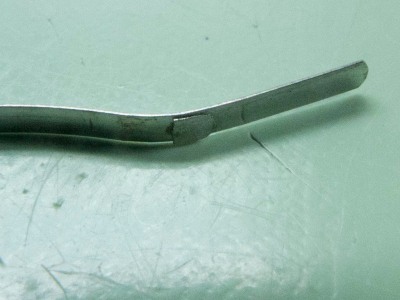 A new mainspring was ordered….

The wheel train was then refitted and tested, there’s no point building up the chrono layer if there’s a problem with the motion work! 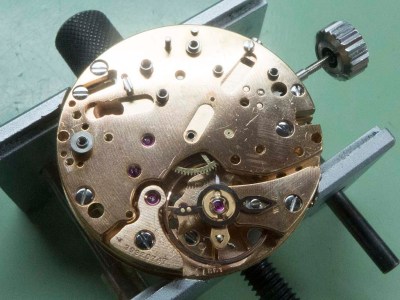 After it was verified that the motion work was operating correctly the wheels were then refitted. 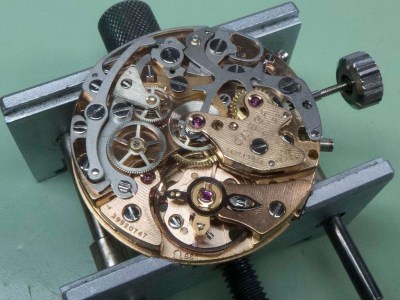 The dial side was rebuilt and the watch was then left to run, this is to check that the adjustments to the hour recording wheel operation has addressed the chrono creep. Handily Omega mark the wheel for this very purpose.

Whilst the movement was on test the dial was addressed. One problem that was apparent during removal was it was only attached by one dial foot. This was because both feet had been broken off and replacements had been glued in place, unfortunately this is never a permanent solution and inevitably one foot had broken off again.

The proper fix for this is to resolder a new set of feet on. The old glue was removed and the dial cleaned.

New legs were soldered into position, the positioning is acutely critical, especially with a chronograph dial. 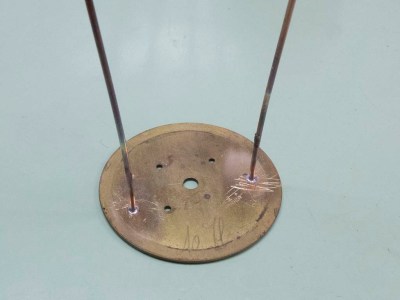 Then they were trimmed to the correct length. 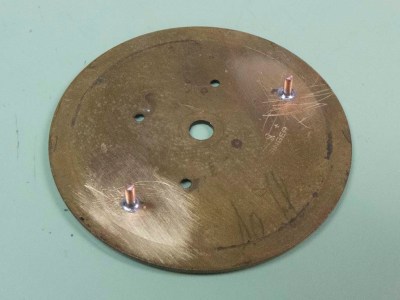 And crucially no damage to the printed side of the dial.

After it was verified that the chrono creep was sorted the dial and hands were refitted. As mentioned previously the paint bond on the hands was very weak and the sub seconds hand actually had a crack in the paint before it was removed. I managed to remove the hand very gingerly in one piece but when it was refitted the inevitable happened and the loose section of paint flaked off. Unfortunately no matter what precautions are taken and no matter how delicately you address problems, things like this can happen with vintage watches! It was decided to preserve originality and leave it as is, a decision I fully endorse. Whilst the movement was still uncased the chrono seconds hand was checked to ensure the flutter had been addressed correctly.

The movement was then recased. 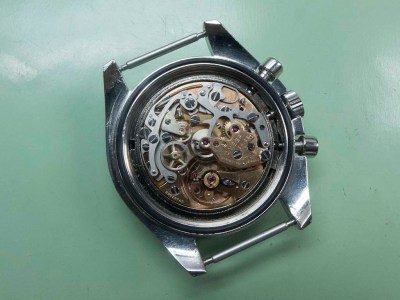 And the watch was finished, good for  few more years yet.