Back in the mid fifties Universal Genève provided Scandinavian Airline crews with precision wristwatches incorporating strong antimagnetic capabilities when the airline opened their new European to California routes that cut 1,000 kilometers off the Journey. These routes were the first that actually crossed over the North pole hence the antimagnetic properties of the watches. The first commercial flight was made on 15th November 1954 and this was a huge event for Scandinavia at the time. On board the flight were the Prime Ministers of Denmark, Sweden and Norway as well as a group of prominent journalists, and there were reported crowds of over 10,000 people to witness the planes departure. Universal Genève introduced the Polerouter (or Polarouter as the model was then called) to mark this auspicious occasion. It was actually created and designed by Gerald Genta, and started life with the calibre 138 automatic movment with a centrally pivoted “bumper” rotor assembly. However, this was soon superceded by the calibre 215 automatic with its famous patented “microtor” movement. It was at this time the models name was changed to Polerouter. The example featured is a Polerouter Sub which is powered by the calibre 1-69 movement (with date) and was introduced in 1962, the calibre 69 was identical apart from having no date complication. This particular example was a non runner and the hands were locked in position, turning the crown to try and adjust them had no effect. 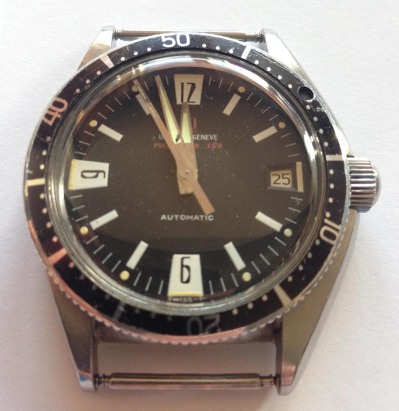 With the caseback removed you can see the famous Microtor assembly, a novel approach to autowinding! 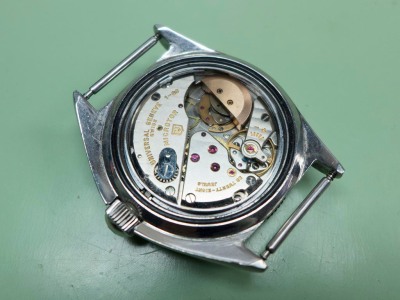 With the hands and dial removed you can see another feature of the calibre 1-69, the offset date ring. 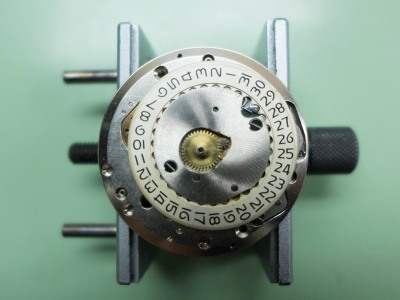 With the top plate removed we can begin to see why the hands are stuck. The canon pinion is seized solid to the centre wheel, so much so that as someone has tried to force the hands around with the crown it’s managed to strip several teeth off the minute wheel before snapping one off the canon pinion. 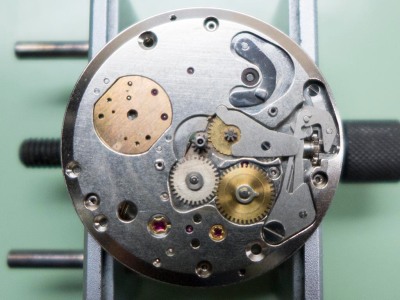 The canon pinion took some removing, I had to soak it overnight with some penetrating oil before I could get it to budge. 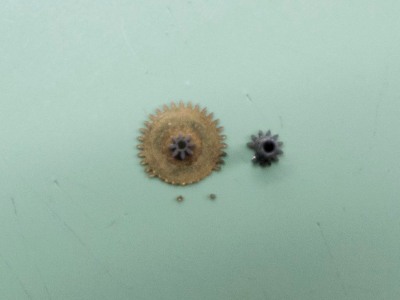 Finally the calendar side was stripped! 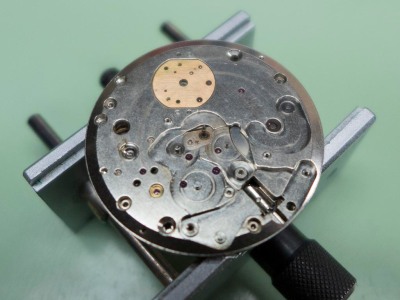 Dissassembly began on the motion work side beginning with the balance assembly. 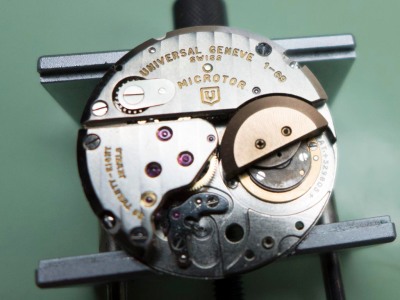 You can see the tiny reverser wheels under the microtors top plate in this shot. 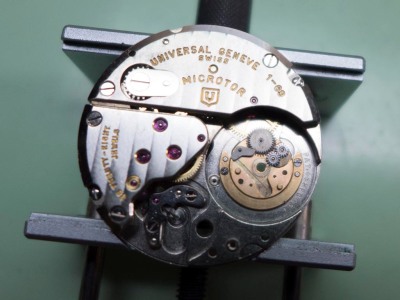 The whole movement was stripped ready for cleaning. 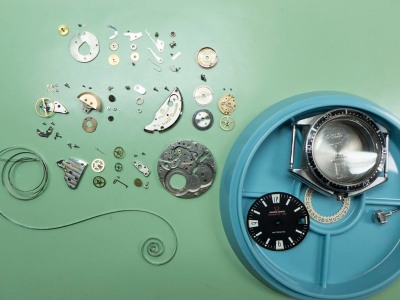 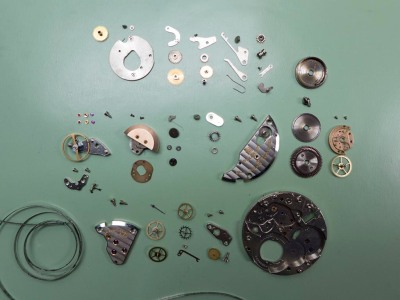 A replacement canon pinion was sourced along with an hour wheel and centre wheel, this still meant we were missing the minute wheel though. 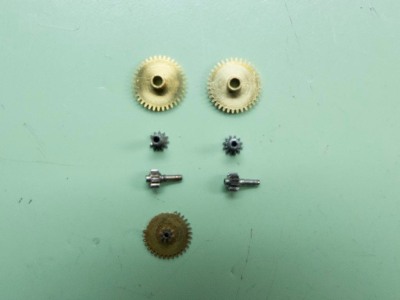 After cleaning and inspection reassembly started. 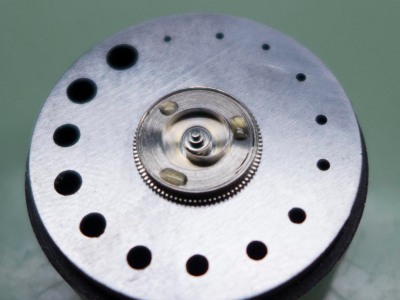 Here the train wheels are placed in position ready for the top plate. 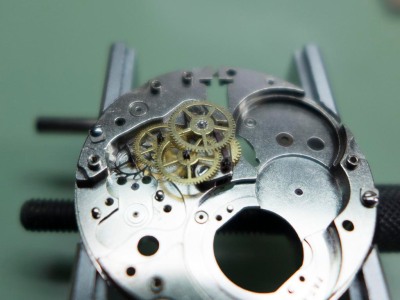 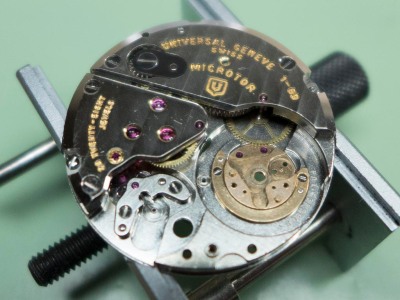 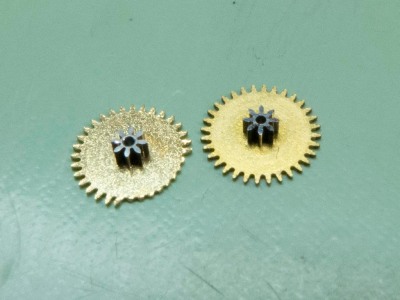 ….and the movement could then be completed. 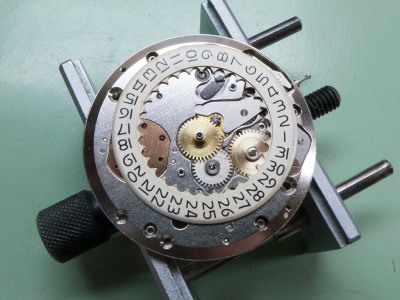 In the meantime the hands had been relumed to match the original colour, these were then fitted after the dial had gone back on. 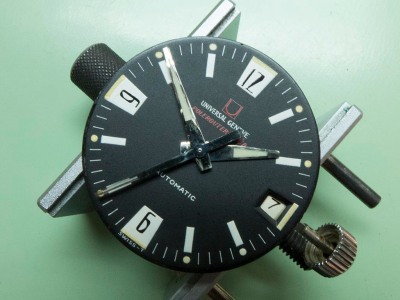 Attention now turned to the case which was stripped and ultrasonically cleaned. 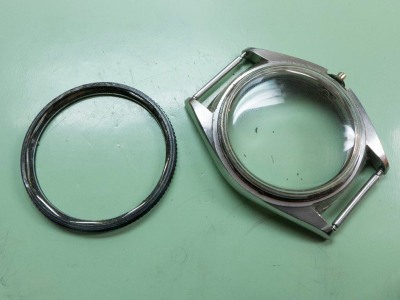 The existing crystal was incorrect as it didn’t have the tiny “U” symbol in the centre, nor the trapezoidal date magnification window. A couple of better crystals were sourced along with a better condition bezel. 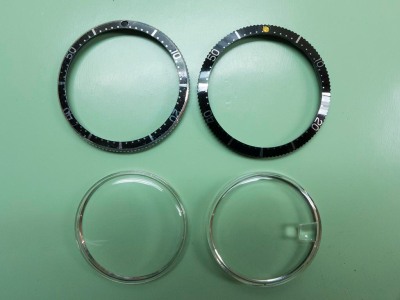 Out of the two replacement crystals the better crystal was married with the best tension ring. 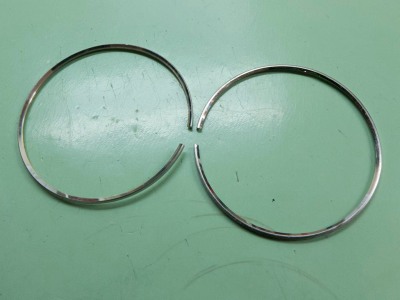 The crystal was then glued in place and cured in the UV oven. 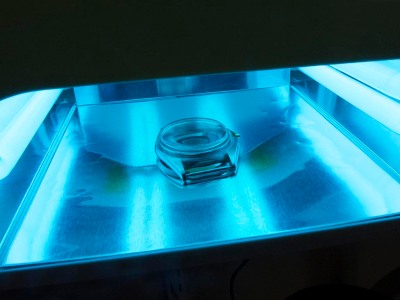 The new bezel was installed and it was then ready for the movement. 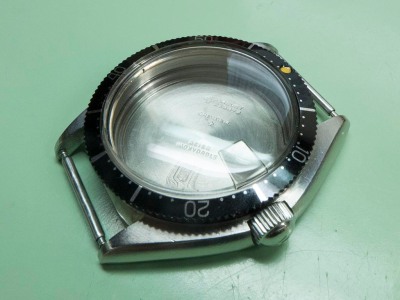 The movement was duly fitted…. 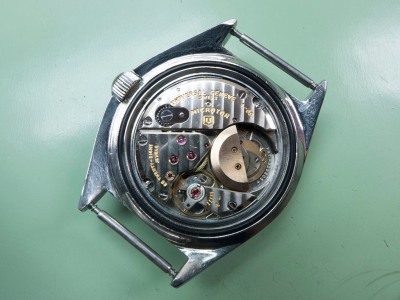 Before the caseback was screwed back on. You can see the Brevet markings and UG logo inside the cover, the outside is undecorated. 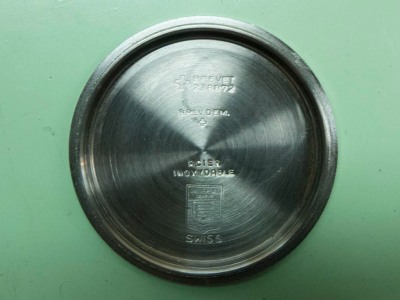 And here she is now, ready for a few more years of service. A vast improvement on how she arrived I think you’ll agree! 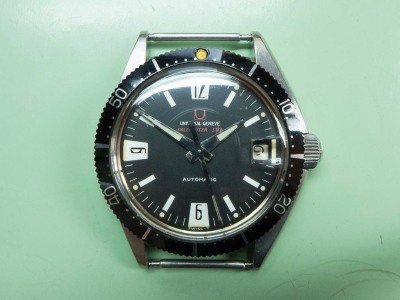 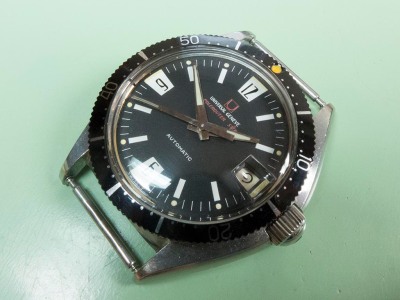 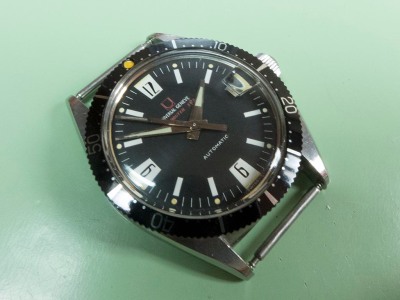