This beautiful gents Rolex oyster perpetual date came in recently for a service. It has a gorgeous engineers bezel and the loveliest deep blue dial I’ve ever seen on one of these.

END_OF_DOCUMENT_TOKEN_TO_BE_REPLACED

This veteran 9k gold cased gents watch came in for a bit of tlc recently. The name Bravingtons Renown as far as I can establish was taken from Bravingtons the London jewellers who had a shop in Pentonville Road, and Renown was the name they gave to their wristwatches. Renown was actually registered by Bravingtons as a trademark in 1955 but they were using the name long before then.

END_OF_DOCUMENT_TOKEN_TO_BE_REPLACED

Sekonda is a British distributor of watches that these days are imported from Asia, but up until 1993 it sourced it’s watches from Russian manufacturers, the majority being rebranded Raketa or Poljots. Unusually the subject of this article is a Sekonda branded Slava. Slava watches were produced in Russia at the Second Moscow Watch Factory for USSRs civilian population and the word Slava when translated into English means ‘Glory’. The 2427 movement is an interesting one due to its twin winding barrels. This example came in for a service as it was running poorly.

END_OF_DOCUMENT_TOKEN_TO_BE_REPLACED

Back in 1968 during the last of the Chronometre competitions that were known as the “Accuracy Observatory Trials” at Neuchatel in Switzerland, the watches from Seiko were judged to have the most accurate mechanical calibres beating all entries from other manufactures. As well as entering competitions Seiko manufactured some astonishingly accurate watches for general sale during those days under their Grand Seiko and King Seiko lines, these were labelled (depending on the line) as Very Fine Adjusted (VFA), Superior Chronometer or just Chronometer. As accurate as these were even their “plain” (if such a term can be used) calibers were remarkable timekeepers. One of the big drivers behind all this increasing accuracy was that Seiko had two manufacturing plants, Suwa and Daini, that were set up in competition with each other to try and push the boundaries of technical and manufacturing development. The example featured in this article is a King Seiko 4402-8000 manufactured in May 1968, right at the time Seiko was winning the Chronometre competitions and striving to make the most accurate watches they could. The watch is powered by the calibre 4402a which is a hand wind, hacking, 25 jewel, 18,000bph movement. It’s a fabulous example which appears to be on it’s original stainless steel bracelet, again which is in fabulous condition.

END_OF_DOCUMENT_TOKEN_TO_BE_REPLACED

This lovely gold Longines arrived recently for a touch of conservation and a full movement service. It dates from the early 1960’s and is powered by the Longines calibre 30L, which was available in a number of different grades. The 30L was the undecorated version, the higher grade the grade the more elaborate the decoration was (on both sides of the calibre) and they also utilised larger balance wheels. The top grade was the calibre 30Z which was used successfully in Observatory Chronometer testing.

END_OF_DOCUMENT_TOKEN_TO_BE_REPLACED

I’ve written a little about the Seamasters history in previous posts and here’s another one for your delight! This “De Ville” example from about 1964 has a stainless steel “Unicase” case with gold capped lugs and a gold bezel and crown. It has a lovely linen type dial with applied gold indicies and gold baton hands. 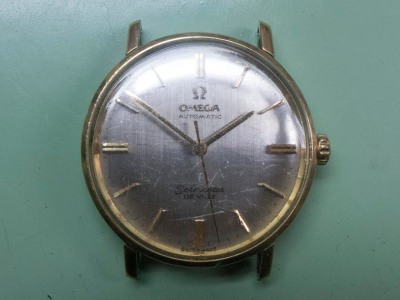 END_OF_DOCUMENT_TOKEN_TO_BE_REPLACED

During the 1960’s a lot of different Seiko models carried the “Business” or “Business A” logo. This branding appealed to Seikos marketing department for a short period and seemed to be aimed at the Japanese salary man. He could proudly wear his new Seiko to work knowing it was designed for “business” people! The example featured is powered by the calibre 6206B, an automatic wind, 18,000bph, 26 jewel day/date movement. As I’ve mentioned before the 62xx series powered a vast range of Seikos models from divers to Grand Seikos. This one came in for a service and to sort out the common problem of the crown jumping whilst setting the day, date or time. As can be seen these models are a handsome watch which wear a lot bigger than they actually are due to the slim bezel making the dial look huge. A feature I particularly like about these is the full day window, these were typically positioned at 6 or 9 0’clock on the dial. The sunburst finish of the dial is also a nice touch.

END_OF_DOCUMENT_TOKEN_TO_BE_REPLACED

This little Cyma Navystar came in for a bit of TLC recently. The Navystar range was introduced in the 1950’s and encompassed many different designs and movements, the common theme being it was a rugged waterproof watch in a slim case. There were over 20 patented technological innovations introduced to allow these timepieces to function under particularly demanding circumstances. The Cymaflex logo at the botttom of the dial refers to the patented anti shock system used on the balance staff.

END_OF_DOCUMENT_TOKEN_TO_BE_REPLACED

This Longines dress watch belongs to the father of chap who sent it in. Many years ago it was taken for a new battery to be fitted only to be told the movement was kaput and it needed a new one. It’s quite an attractive little watch with its gold dial, calendar wheel and baton hands.

END_OF_DOCUMENT_TOKEN_TO_BE_REPLACED

This lovely gold dialled Rolex reference 1603 came in with a low power reserve, when I tested it I got 28 hours from a full wind which is about 33% down on what you’d expect from a healthy 1560 calibre. A service and new mainspring should sort this out! The watch dates from 1961 according to the inside of the caseback and is in exactly the condition I love to see vintage watches in that have been used as intended and looked after. 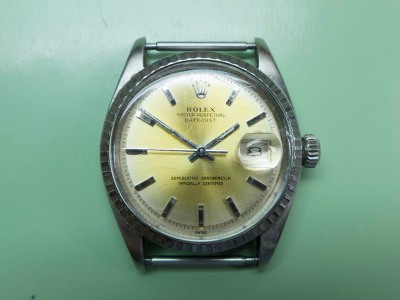